Under the rose (sub rosa). In strict confidence,
Cupid gave Harpoc'rates (the god of silence) a rose, to bribe him not to betray the amours of Venus. Hence the flower became the emblem of silence. It was for this reason sculptured on the ceilings of banquet-rooms, to remind the guests that what was spoken sub vino was not to be uttered sub divo. In 1526 it was placed over confessionals. The banquet-room ceiling at Haddon Hall is decorated with roses. (French, parler sous la rose.)
--Brewer Dictionary of Phrase & Fable, E. Cobham Brewer

Haddon Hall is a fortified medieval manor house dating from the 12 th Century, and is the home of Lord and Lady Edward Manners whose family have owned it since 1567.Described by Simon Jenkins in 1000 Best houses as "the most perfect house to survive from the middle ages", this remarkable old house is surrounded by terraced Elizabethan gardens and is set amongst the rolling countryside of the Peak District National Park. Haddon has featured in many films and TV programmes including Pride and Prejudice starring Keira Knightly, Mathew MacFadeyn, and Dame Judy Dench. Most recently Haddon was used as the setting for Thornfield in the BBC's adaptation of Jane Eyre.
--

Posted by John Horlivy at Saturday, January 20, 2007 No comments:

sesquipedalian:
1: having many syllables, long
2: given to or characterized by the use of long words
--Merriam Webster's Collegiate Dictionary, 11th Edition
3: A speaker or writer inclined to use sesquipedalian diction

Sesquipedalian, an adjective, derives from the Latin sesquipedalis which "means a foot and a half long, and figuratively that is the length of a sesquipedalian word, which is one consisting of several syllables. A writer or a speaker has sesquipedalian style if he or she uses many long words".
--The Grand Panjandrum, J. N. Hook.

Bloggin' John Comments:
You don't have to look very far to find examples of sesquipedalian words. This very blog has disembouged . . . I mean . . . popped the cork and let flow discussions of such terms as rejectamenta, circumbendibus, and, of course sesquipedalian (its own apt example of its very meaning).

I don't recommend making a random habit of using in daily conversation such "big" words as circumbendibus or rejectamenta. Rather, use the word that best fits the occasion and your intention. You have to decide whether to be formal or informal, witty or serious, ironic or direct, and, accordingly, make your choices: dog poop or rejectament; clear or pellucid; demoted or plutoed. Then wait for your readers' responses.

Sadly, I recount the death on March 8, 2008, of William F. Buckley, Jr. — the verbal prime minister of sesquipedalian precision among Twentieth Century political pundits of the page and the media. As a public debater promoting the Conservative Movement — which he singlehandedly brought to new life during the 1960's, most singularly by way of his magazine the National Review and his television program Firing Line — Buckley seemed never to abstain from using an arcane or a multi-syllabic word if it promised to effect clarification of an idea or gain an intellectual edge over an opponent less lexically adept.

•
During the 1960's, as a beginning teacher of High School English, I was possessed of a personal vocabulary that was no more than, shall I say, sufficient to the job. I began watching "Firing Line," Buckley's television program that featured him interviewing any prominent thinker or newsmaker of the day brave enough to engage in wit combat with the keen edged wordsman. With a pocket sized spiral bound notebook in my left hand and pencil in my right, I took notes on the program, not so much, I confess, for the ideas, but for the words — Buckley's words.


•
The New York Times marked the word smith's passing with apt diction in this headline,

and in the opening sentence to his obituary:

William F.Buckley, Jr., who marshaled polysyllabic exuberance, arched eyebrows and a refined, perspicacious mind to elevate conservatism to the center of American political discourse, died on Wednesday [March 5, 2008] at his home in Stamford, Conn. He was 82. 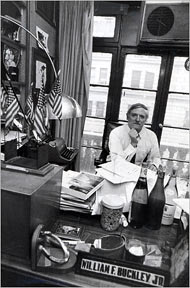 Apparently, no one was present at the moment of Buckley's death, so there are no final words to ponder. But if someone were there at that final moment before he slumped onto his escritoire with bore the final words he had written, I venture to suggest that the auditor might have heard Buckley go to the Latin to utter, with arch confidence, "Absum!," id est, "Time to go!"

void: in jigsaw puzzles, the space into which the rounded projection ("nub") is placed to form a "lock."
--Wierd Words, Irwin M. Berent and Rod L Evans

Bloggin John Comments
Finally: a vocabulary to use while locking the nubs into the voids of a crossword puzzle!

I don't know by what authority Berent--with a Master's degree in history--and Evans--with a Ph.D. in philosophy--claim that the terms void, nub, and lock comprise the basic nomenclature of jigsaw puzzles. I could find no other sources about jigsaw puzzle terminology on the Web, not even at site of the National Jigsaw Puzzle Society. So unless some more authoritative source comes forth with another set of terms, the parts of a jigsaw puzzle are, apparently, void, nub, and lock.

Bloggin John Comments
• Virginia is inclined toward turning off the main trail to explore every circumbendibus she sees curling off into the disance--no matter how tortuous or embowered.--B'n' J'

• The word circumloction (in the definition above) needs some explanation. In brief, circumlocution identifies a piece of writing as being either wordy or evasive. Webster's Third New International Dictionary, Unabridged explains circumlocution this way:
1 a : the use of an unnecessarily large number of words to express an idea : indirect or roundabout expression

Posted by John Horlivy at Wednesday, January 17, 2007 No comments:

farrago: one of many words used to describe a mixture of diverse objects. n. From the Latin word for mixed fodder for cattle, related to farina and farinaceous. Other words for this kind of mishmash are: hodgepodge, gallimaufry, olio, potpourri, goulash, salmagundi, pastiche, omnium gatherum (itself a mixture), and even minestrone.

"They persist in compounding the original error, if that is what it was, with a farrago of falsehoods."
--I Always Look Up the Word "Egregious," Maxwell Nurnberg

Bloggin John Comments:
If you are curious about the meanings of farina and farinaceous, here is how they are defined in The Century Dictionary:

farina 1. In a
general sense, meal or flour. Specifically--2.
A soft, tasteless, and commonly white flour,
obtained by trituration of the seeds of cereal
and leguminous plants, and of some roots, as
the potato. It consists of gluten, starch, and
mucilage.--3. A preparation of white maize
in granular form, coarser than meal, but finer
than hominy. It is used for puddings, etc.
[U. S.]

farinaceous (far-i-na'shius), a. 1. Consisting or made of
meal or flour: as, a fariaceo,s diet, which con-
sists of articles prepared from the meal or flour
of the various species of corn or grain.
When one huge wooden bowl before them stood,
Fill'd with huge balls offarinaceous food.
Crabbe, Works, IV. 154.

* The Century Dictionary:
The Century Dictionary and Cyclopedia was one of the largest and most highly regarded encyclopedic dictionaries of the English language. The first edition was published from 1889 to 1891 by the Century Company of New York, in six, eight, or ten volume versions (originally issued in 24 fascicles) in 7,046 pages with some 10,000 wood-engraved illustrations. It was edited by Sanskrit scholar and linguist William Dwight Whitney, with Benjamin Eli Smith's assistance. It was a great expansion of the smaller Imperial Dictionary, which in turn had been based on the 1841 edition of Noah Webster's American Dictionary.
<--http://en.wikipedia.org/wiki/Century_Dictionary>

Posted by John Horlivy at Tuesday, January 16, 2007 No comments:


Bloggin' John Comments:
When gurgles in your stomach broadcast loud enough to catch the attention of others, you can try for some social cover by using a sesquipedalian (long) word. Say: "Oh excuse me. Just a touch of borborygmos today."

Bloggin' John Comments
• At first glance, mirific might appear to be a conflation of miraculous and terrific: mir - ific. But not so. The word came from the Latin for "to wonder at," mirificus, which ultimately contracted to mirific.
• Mirific also carries the sense of "marvelous" as "in adventures" -- W.J.Locke>.
--Webster's Third New International Dictionary, Unabridged. Merriam-Webster, 2002. http://unabridged.merriam-webster.com
Posted by John Horlivy at Sunday, January 14, 2007 1 comment: