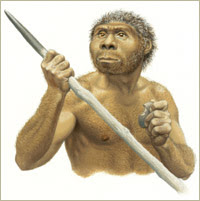 1. a. the reappearance in an individual of characteristics of some remote ancestor that have been absent in intervening generations.
b. an individual embodying such a reversion.
2. reversion to an earlier type; throwback.

We need to stop Supreme Court confirmation hearings. . . . . The game (and it is one) becomes an atavistic search for an emotional gotcha moment, a test more appropriate to a hockey goalie than a Supreme Court justice.

COMMENT
Taking the long ancestral view, we could say that Fineman is suggests archly that certain Judiciary Committee members seem to be acting less like members of the generation of homo sapiens, but more like members of the next ancestral generation behind us, homo erectus. Bob Holms of New Scientist (1 August, 2009, 6) tells us that the average brain volume of homo sapiens is 1500 cubic centimeters and that that of homo erectus is smaller by a third, at only 1000 cubic centimeters. In a sense, Fineman is telling each perceived atavist on the committee: "Grow your brain!"

ORIGIN
From the Latin atavas, meaning ancestor
OTHER FORMS

A person held in contempt, esp. one ridiculed as studious, puny, or unfashionable; a fool.

That definition comes from the OED,
which also likens dweeb to
nerd:

an insignificant, foolish, or socially inept person; a person who is boringly conventional or studious.

Now also: spec. a person who pursues an unfashionable or highly technical interest with obsessive or exclusive dedication.

SYNONYMS
Keying off the word nerd, the Oxford American Writer's Thesaurus (2003) offers bore as a standard usage synonym; the terms dork, (our word) dweeb, nimrod, geek, drip, and loser as informal usage choices; and techie as a job-specific descriptor.
◆
IN USE

Of course, Chief Justice John Roberts portrayed himself four years ago as a cautious and judicially modest dweeb.

The optional noun phrase "a cautious and judicially modest nerd" would fail here because nerd tends to carry a higher pejorative quotient than does the more endearing dweeb. I think this is so because of the associations of the sound projected by each word. Nerd sounds more aggressive, rhyming with grrr and seems more fulfilled when braced with an exclamation mark: "Nerd!" Dweeb does not exclaim. It simply states itself, with the necessarily deliberate enunciations of the consonants.

◆
COMMENTS
Dweeb appears on Words Worth quite simply because I find it fun to pronounce. Dweeb: opens with an assertive dental d, flings itself into a childlike wee, and closes with a firm puff, almost a pop!, of a b.

If you agree that dweeb speaking is fun, put your voice around the even more playful adjective, dweeby, and you'll enjoy all of the fun of dweeb, plus bee as a closing rhyme. The OED sample sentence carries a third ee-rhyme with the proper name Reeve:

As the dweeby, narcissistic Blaine, Reeve is male-model handsome and bland —just what the role calls for; 1988 Washington Post 4 Mar. D7/2

But of what stuff is such an odd word made? For a succinct answer, we turn to the New Oxford American Dictionary (2nd Ed.), which, first of all, states that the word's earliest appearance occurred in the 1980s and, then, suggests that it is "perhaps a blend of dwarf and early 20th century feeb, "a feebleminded person' (from feeble)."

Learning that dweeb may have sprung in part from dwarf prompts a degree of PC discomfort, if we imagine the original coiner of the term to be a person who thought of dwarves as lesser humans. But we will take the more charitable view and suggest that mating dwarf with feeb was no more than a dual trope that transfers smallness in size (mass) to a perceived smallness of mental acumen in the person deemed dweeby or, with a bit of literary sniff, dweebish.

In one sense, a word made of five characters shaped into a single syllable makes for a mere mite of a word. But considering its sound effects and its likely devious origins, dweeb makes for one feisty bantam of a word.