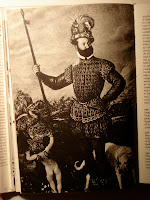 ➣ "With humor, reasonableness, and a touch of sarcasm, [President Obama] invited the Republican grandees in the audience to play the role of straight man, so to speak, and they obliged: row upon row of pale, middle-aged white men, unmoving and unmoved, frowning or smirking at every Presidential request for cooperation.—Hendrik Hertzberg. "Sparrin' Words," The Talk of the Town, The New Yorker, Feb. 8, 2010.

➣ "His name was Bernie Madoff, a former chairman of NASDAQ and an industry grandee." — "Prophets of the financial crisis," Economist, March 18, 2010.

➣ "The Planet Mars..hath been reckoned one of the Grandees in Aetherial Regions." 1686 Goad, Celest. Bodies II. iv. 194 —OED 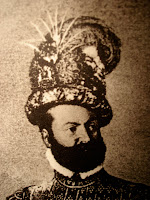 Now that's a "Grandee-ose" Hat!
A Grandee in early Spain, Brewer notes, "was a nobleman of the highest rank, who had the privilege of remaining covered in the king's presence." By "remaining covered" Brewer mean they could wear their grandiose hats in the presence of the king.

The title appears first to have been assumed during the late Middle Ages by certain of the ricos hombres, or powerful magnates of the realm, who had by then acquired vast influence and considerable privileges, including one—that of wearing a hat in the king’s presence—which later became characteristic of the dignity of grandee. —The Encyclopaedia Britannica [EB]

Eventually, specific protocols about these proto-symbolic hats were set in place:

[B]y the early 17th century the grandees of Spain had been divided into three classes: those who spoke to the king and received his reply with their heads covered; those who addressed him uncovered but put on their hats to hear his answer; and those who awaited the permission of the king before covering themselves.—EB

Grandees were allowed another privilege, to be "addressed by the king as 'my cousin” (mi primo), whereas ordinary nobles were only qualified as “my kinsman” (mi pariente).—EB

Jump to present time in the United States and we learn that Republican grandees of  the House of Representatives who met in February in Baltimore to discuss health care reform with President Barack Obama found themselves addressed by their leader not with the distant "my kinsman" formality of  "Congressman" but with the "my cousin" first-name familiarity of John, Eric, and Mike.


Use of the informal direct address did not help warm these Republican grandees  into accepting the President's ideas.  Their "No we won't!" minds had been locked in cold storage long before the conference.