auto-da-fe: The public burning of a heretic who had been sentenced by the Inquisition.—Chambers 21 Century Dictionary

In the popular imagination, "auto-da-fé" has come to refer to burning at the stake for heresy. —Wikipedia

As [Rush Limbaugh] and Sarah Palin conduct their auto-da-fé of moderate Republicans — “Moderates by definition have no principles,” he told his radio audience on Monday — Limbaugh is more than ever the face of his party, as Rahm Emanuel said.

Maureen Dowd could have used any number of words or phrases as the direct object of her sentence — dress down, rebuke, remonstrance, lambasting, reproval, censure, repremand, to mention a few — but she was interested in something more dramatic, more attention getting. So she chose the rhetorical figure called hyperbole, which Richard Lanham defines as "exaggerated or extravagant terms used for emphasis and intended to be understood literally; self-conscious exaggeration."

Dowd achieved the hyperbolic effect by using auto-da-fe as an extreem metaphor for the chastisements Rush Limbaugh and Sara Palin had directed at moderate Republicans. What Dowd intends to transfer from the events of an auto-da-fe are not the horrific circumstances of the event (described below), but the element of rigid autocracy, which the Catholic Church exercised to keep its members in line. For Limbaugh and Palin, the authority would be assumed authority.

Later in the article, Dowd delineates the arrogance she sees in the actions of Limbaugh and Palin:

But the tactics of Limbaugh, Palin, Cheney & Fille are more cynical: They spin certainty, ignoring their side’s screw-ups, and they exploit patriotism, labeling all critics as traitors.

We also find auto-da-fe used in its extended sense in an editorial title from The Washington Times :

In a unprecedented move, the Obama administration essentially fired TK Waggoner, the chief executive of General Motors. This is unheard of in American history and sends an ominous signal to millions of shareholders for whom the auto maker is part of their retirement plans.

As with the Limbaugh-Palin example, the author of this editorial title selected out the element of rigid autocracy from the auto-da-fe event, not the horrific circumstances of the ceremony. In addition, auto plays a pun, a type of pun called an•ta•nac'la•sis, which employs a word in two different senses, in this instance, as is obvious, auto, from the Portuguese, meaning act, and auto, from modern English, short for automobile. Clever.

THE EVENTS OF THE AUTO-DA-FE 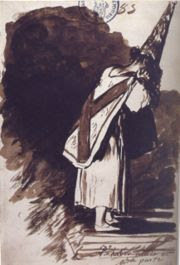 in a sketch by Goya.

Because the following account describes some truly of horrific events, consider it "optional reading."

[Public execution] was rarely a simple matter of dispatching the victim. Even those who confessed immediately were tortured. Execution was not the sentence – it was an additional sentence. At the end of the trial a public ceremony was held called an Auto-da-fé (Portuguese for Act of Faith). The victim was dressed in a penitential tunic ( san benito) painted with a design. Impenitents wore tunics painted with pictures of their wearers burning in Hell with devils fanning the flames. On their heads they wore 3-foot-long pointed pasteboard caps (corozas), also painted. Around their necks they wore nooses, and in their hands they carried candles. Anyone judged likely to speak out against the Inquisition was gagged. After a procession came a Mass and sermon, in which the Inquisition was praised and heresy condemned. The sentences were read aloud and then carried out. As usual the secular authorities were obliged to burn victims on the Church’s behalf on the grounds that ecclesia non novit sanguinem – the Church does not shed blood. Burning generally took place on Sundays or festivals in order to attract the largest possible audience. Participation was a meritorious act – so for example any persons who helped collect firewood would earn a remission of their sins.

A slow roasting was considered preferable to quick incineration. Victims were tied high up on their stakes, partly to give the crowds of faithful a good view, partly to prolong the agony. Sometimes there was further torture before the fire was lit. For example Protestants who refused to recant had burning sprigs of gorse thrust into their faces until they were burned black. The whole event was a popular festival for the devout, who enjoyed the spectacle and ridiculed the victims in their death agonies. The events were closely linked to royal spectacles. The king was obliged by his coronation oath to attend these mass burnings. Such burnings were even held to help celebrate royal marriages.

Enough about auto-da-fe. I've researched as much about its oppressive ideology and inhumane effects as I can tolerate. —Bloggin' John

Posted by John Horlivy at Sunday, November 08, 2009 No comments: