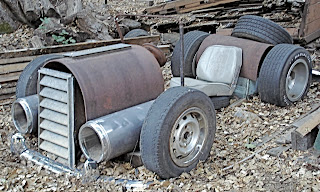 ➢ There’s a spirit of bricolage running through this [fashion] season, as if designers wanted their clothes to convey as many possibilities as possible. — Armand Limnander, "Group Hug | Paris," Women's Fashion, March 5, 2010.

➢ At the same time it's clear that technology and the mechanisms of the Web have been accelerating certain trends already percolating through our culture--including the blurring of news and entertainment, a growing polarization in national politics, a deconstructionist view of literature . . . , the prominence of postmodernism in the form of mashups and bricolage, and a growing cultural relativism . . . . —Michiko Kakutani. "Texts Without Context," The New York Times, "Arts & Leisure," March 21, 2010, 25.

➢ Here is a White Christian Nationalist group [the Tea Party] whose worldview is a bricolage of Ayn Rand novels, fundamentalist jeremiads and an ethnically-cleansed "history"  —"GOP, step away from the Tea Party," The Guardian - ‎Mar 22, 2010‎

——————————————————————
COMMENTS on bricolage and bricoleur
In his book The Savage Mind (1962), French anthropologist Claude Levi-Strauss [klod la'-vi stros] contrasted two types of problem solvers: the Bricoleur, who takes the "do-it-yourself" approach and the Engineer, who works "by-the-book."  Wikipedia explains these two concepts further:

[bricoleur] has come to mean one who works with his hands, usually in devious or "crafty" ways in comparison to the true craftsman, whom Lévi-Strauss calls the Engineer. The bricoleur  is adept at many tasks and at putting preexisting things together in new ways. The Engineer deals with projects in their entirety, taking into account the availability of materials and tools required. The bricoleur approximates "the savage mind" and the Engineer approximates the scientific mind."

Besides anthropology, bricolage functions usefully in many other disciplines.  Here are a few of them, gleaned from the Wapedia's page on bricolage:

In music, "Instrumental bricolage . . . includes the use of found objects as instruments, such as in the cases of

• humming through a comb and wax paper,

• Trinidadian Steel Drums (made from industrial storage drums),
• African drums and thumb pianos made from recycled pots and pans."

Not to mention the tinkered sound of Punk.

In the visual arts, "bricolage is [viewed] as a technique where works are construted from various materials on hand, and is seen as a characteristic of postmodern works."  The collage art form is of its essence a bricolage.

In theatrical improvisation, bricolage makes use of  "the stage and the [pantomimed] materials [that] are all made  up on the spot to represent actual things the players know from past experience."

In philosophy the bricoleur has be likened to Coyote, the archetype of the trickster.

The fashion industry uses the  bricolage style by "incorporating  items typically utilized for other purposes. For example, candy wrappers are woven together to produce a purse."

In television, MacGyver has been described as a "paragon of a bricoleur, creating solutions for the problem to be solved out of available found objects" and the A-Team was known for "creating, mainly weapons, out of any objects available."

Information systems, internet programming, as well as business organization and management, all employ bricolage. To read about its role in these applications, visit (wapedia.mobi/en/Bricolage).

§
Needless to say, this bricolage on bricolage has been a pleasure for this bricoleur to bricolage.
#
666 words
Posted by John Horlivy at Sunday, April 04, 2010 2 comments: