To avoid, shun
To avoid, keep clear of, escape (a danger or inconvenience) 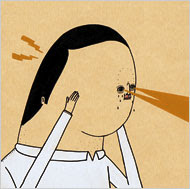 Illustration by Matthew Feyld
From “A Head Case”
A personal essay by Michael J. Nelson

So I gave up on medications eschewing even aspirin for 10 years. But then I heard about a novel kind of treatment that involves having Novocain injected into the head, the theory being that if you could somehow get your muscles to “remember” what it was like not to feel pain, they’d return to their normal state.

Eschew appeared in English circa 1340. From 900-1400 its predecessor, eschiver, was part of Old French, and prior to that, from 900-1400 in the form of skiuhan, it was a part Frankish, the language spoken by the people then living in Gaul. All along this French-into-English pathway, eschew has meant “dread, avoid, shun.”— Based on "eschew" Douglas Harper. Online Etymology Dictionary, 2001. (www.etymonline.com) (15, June, 2007).

From The American Heritage Dictionary:

Let's use a conceptual metaphor, THE CONTAINER IS BAD, to discuss these five synonyms in closer detail.

A conceptual metaphor makes a comparative statement by overlapping two ideas, or conceptual domains of experience. In the instance of THE CONTAINER IS BAD, the idea "that which can contain a person: an idea, a movement, a place, a person" is mapped upon the idea of "my well-being or status."

It has shown us that of the five synonyms The American Heritage Dictionary has presented to us—eschew, escape, avoid, shun, and evade—only two of them by definition suggest ethical challenges.
The container metaphor also taught us, in passing, that by definition only one of the five synonyms posits the possibilities of skill, style, "adroit maneuvering," "elud[ing]" something "artfully," and even panache—and that word is evade.

If you are saying to yourself, "That's all well and good—going into eschew and five of its synonyms in some depth—but what if I'm in the middle of a piece of writing and none of the five you mentioned here fits the context I've created, in terms of syntax, tone, compatability with a nearby figure of speech, rhythm, or even sound? What then?"

Visit a thesaurus, such as the one from Oxford University Press that was packaged in my Macintosh PowerBook:

Synonyms for eschew:
refrain from, give up, forgo, shun, renounce, steer clear of, have nothing to do with, fight shy of; relinquish, reject, disavow, abandon, spurn, wash one's hands of, drop; informal kick, pack in; formal forswear, abjure.

First of all, let's clear up any obscurity (read obfuscation) about the meaning of obfuscation. The OED defines obfuscation as "concealment or obscuration of a concept, idea, expression."

If you want to learn more about the catch phrase "Eschew Obfuscation"—which a few years ago ranked popular as a bumper sticker—you can go its eponymous website (address: [beclear.blogspot.com]), which is subtitled,

and read the following:

Literally, the meaning is "avoid ambiguity, adopt clarity", but the use of extremely uncommon words in the English language itself causes confusion, making the phrase a prime example of irony.

We have investigated—without success—the following known pensters in the game of coinage:
Readers of Word's Worth should know with confidence that we will continue our quest for the catch-phrase coiner.