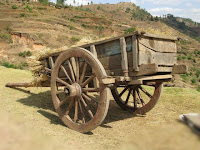 ➤ Originally used to carry agricultural supplies, it was most often associated with the cartage of animal manure.

➤ It was also used, however, by artillery units to carry tools and ammunition, and during the French Revolution  it gained wide celebrity as the vehicle used to bear prisoners to the guillotine. 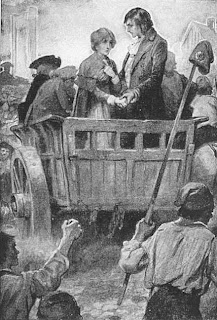 "Sidney Carton and the little seamstress rumble off
to their deaths in a tumbrel escorted by Jacobins."
Dickens, Charles. A Tale of Two Cities.
Illustration by A. A. Dixon. London: Collins, 1905.
(From the personal collection of George Gorniak,
Editor of The Dickens Magazine.)

In coats and ties, the University of Denver's men's lacrosse team caught the five-o'clock tumbrel to the Carrier Dome. It was actually a chartered bus, . . . on its way to face off with Syracuse, the No. 1 team in the college world, national champions in 2008, national champions 2009.  —John McPhee, "Pioneer: A star coach goes west,"  The New Yorker, March 22, 2010, 34.


As I read McPhee's sentence, he is using tumbrel in its franco-revolutionary sense as part of a metaphor to signify a bus carrying the University of Denver Lacrosse Team to the Carrier Dome where they most certainly will be roundly defeated by the No. 1 team in the college world, the University of Syracuse.  Sure enough, Syracuse won: 15-9.


tumbrel remark n ➤ A comment made by a rich person that makes the lower class think of lampposts and guillotines.  Marie Antoinette saying, "Let them eat cake," is a tumbrel remark. —The Urban Dictionary
When I first read this definition, I was puzzled by the phrase "lampposts and guillotines."  But a bit of googling promptly enough led me to the answer in an essay titled "The Uses of Diversity" by British critic and essayist Gilbert Keith Chesterton (1874-1936):

Thus, we could re-phrase the above definition of tumbrel remark to arrive at the following signification, the details of which are admittedly uncomfortably specific:
➤ a comment made by a rich person that makes the members of the lower class want to lynch on a lamp post or guillotine the speaker.

——————————————————————
Tumbrel remark IN USE
Slate essayist Christopher Hitchens claims that past presidential candidate John McCain let slip a tumbrel remark in his "now-notorious answer" to the question of how many houses he and his wife, Cindy, owned.  McCain replied: "I think—I'll have my staff get to you. It's condominiums where—I'll have them get to you." Hitchens recounts that "then everybody [in the room] began acting as if he'd just told all the poor and unemployed to eat cake."
Hitchens then proceeds to articulate his own archly elaborated definition of tumbrel remark and offers us three more examples of it.

I account myself as something of an expert on what writer Joyce Cary once called "tumbrel remarks." A tumbrel remark is an unguarded comment by an uncontrollably rich person, of such crass insensitivity that it makes the workers and peasants think of lampposts and guillotines.

I can give you a few for flavor.

• The late queen mother, being driven in a Rolls-Royce through a stricken district of Manchester, England, said as she winced at the view, "I see no point at all in being poor."

• The Duke of St. Albans once told an interviewer that an ancestor of his had lost about 50 million pounds in a foolish speculation in South African goldfields, adding after a pause, "That was a lot of money in those days."

• The Duke of Devonshire, having been criticized in the London Times, announced in an annoyed and plaintive tone that he would no longer have the newspaper "in any of my houses."