From "School of Hard Knots" by Kevin Guilfoile:

My own knowledge [of tying knots] had always been like a rice paddy—acres wide and ankle-deep. In college I was

an American studies major, qualified for little upon graduation but schadenfreude at the failures of "Jeopardy!" contestants. [Clifford] Ashly [author of "The Ashley Book of Knots"] had a love for knots and dedicated his life to cataloguing every single one of them. That was how a real man lived! That was commitment. I resolved to be his apprentice.

Schadenfreude n. Malicious enjoyment of the misfortunes of others. 1852

The word comes from the juxtaposition (collocation) of two German nouns, harm + joy. Thus, schaden + freude. So when saying the word, we enunciate it as if it were two words, with a sliver of a pause between them.

Schadenfreude is an inclination many of us are none too eager to own up to. We're not talking here about a mere chuckle over a Will Farrow prat fall.

What we are talking about—scratch that—what I am talking about is the pleasure that long-time opponents of the second Bushie White House and of the recent Republican House and Senate feel [read enjoy] when one more malfeasant Republican or Bush lackey is exposed or enjailed (yes, enjailed is a word—as are injailed and engaoled—granted an old one, but a good one, worthy of renewal, first seen, (according to the OED) in 1631, and last seen I know not when or where, save on this page). 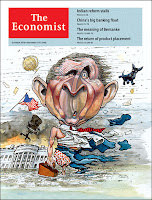 Twenty-four-seven cable news-programming helps schadenfreude maintain its wickedness within over time, enabling viewers to
• watch over, and over, and over again, yet another Justice Department aide resign to avoid a subpoena; or
• hear Attorney General Gonzales asseverate reliably on cue, "I don't recall"; or
• watch black-brimmed Jack Abramhoff strut from court house to car after pleading guilty to corruption of a sneak of Republican public weasels, or . . .

From the OED: shadenfreude in use:

1852 What a fearful thing is it that any language should have a word expressive of the pleasure which men feel at the calamities of others; for the existence of the word bears testimony to the existence of the thing. And yet in more than one such a word is found... In the Greek , in the German, ‘Schadenfreude’.

1895 German Emperor William— But the Schadenfreude, or malicious joy, of the French was premature.

1901 Sometimes it [sc. Queen Victoria's smile] would be coyly negative, leading the speaker on, the lips slightly opened, with a suggestion of kindly fun, even of a little innocent Schadenfreude.

1920 The particular sentiment described in German as ‘schadenfreude’ ‘pleasure over another's troubles’ (how characteristic it is that there should be no equivalent in any other language for this peculiarly Teutonic emotion!) makes but little appeal to the average Briton except where questions of age and of failing powers come into play.

1939 There appears to be a certain amount of ‘Schadenfreude’ in London..at Germany's failure to get the German-Soviet Pact ratified.

1947 W. H. AUDEN, Age of Anxiety The Schadenfreude of cooks at keyholes.

1977 Solidarity or no solidarity, Widger was not wholly without Schadenfreude at seeing his informative colleague discomfited [1] for once.

In no way does this writer encourage the Reader's listening to the whisperings of Shadenfreude. But if you do, dear Reader, at least you can now attach a proper name to your impropriety.