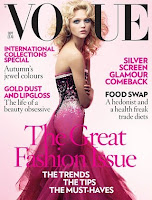 waste or debris of any kind: streets filled with rubble and detritus

• gravel, sand, silt, or other material produced by erosion.

• organic matter produced by the decomposition of organisms.

[from French, from Latin detritus, from deterere 'wear away' dētrītus worn, from dē off, and terere, trītum to rub]

Setting a record at 840 pages, 727 of them ads, and weighing as much as a preemie — 4 pounds, 9 ounces — [the September 2007 issue of Vogue magazine] is now detritus of the Golden Age of excessive spending.

Detritus: DOZENS OF SYNONYMS. Get ready for some odd words.

The synonymic choices made by editors of thesauruses (or thesauri) for a specific word can tell us a great deal about the size and slant of each editor's mind.

For detritus, Erin McKean, Editor in Chief of the Oxford American Writer's Thesaurus (2004) offers us 20 useful synonyms from standard English. And they are short words, not one exceeding two syllables.

Under the headword debris, we find 16 of the synonyms you've just read for detritus plus one, oddly, not among its detrital compeers: junk.

Unlike the self-evident, ready-to-use synonyms for detritus presented in the Oxford American Writer's Thesaurus, the synonyms in A.F. Sisson's Sisson's Word and Expression Locater (1966) are, for the most part, not everyday words. To use them effectively, you will have to either define them for the reader or provide contextual details that make their meaning obvious. Three words extend to three syllables — another, out to five.

The tenor of theses words is either literary or geologically technical.

Detritus was not honored with its own entry, so we turn to the word debris:

Following Sisson's suggestion, we discover under the headword rubbish additional terms that either whiff of the literary or describe matters terrestrial, even scatological (Cf. rejectamenta).

We have here a batch of words that need further cooking. Chambers Reference Online provides a detailed set of detrital contexts, ranging from leftover food and carcass parts to "ritual foolery" and a surprising, uh, unmentionable at list's end.

oddments: something remaining over, one of a broken set (often in pl)

orts (usu in pl) a fragment, esp one left from a meal

offal: waste or rejected parts, esp of a carcass an edible part cut off in dressing a carcase, esp entrails, heart, liver, kidney, tongue, etc. anything worthless or unfit for use, refuse

And, finally, what about the very first book of synonyms, Roget's Thesaurus of the English Language," created by Dr. Peter Mark Roget (1779–1869) in 1805 and released to the public on 29 April 1852 (Wikipedia)? What does this time-honored tome have to offer?

In sum, 85 synonyms, which it fans out into three subgroups:

Just skimming the chart "Synonyms within Contexts: Detritus" below, you will spot many synonyms from the Sisson and the Oxford thesauri, plus some 14 others we've not yet considered but which, because of their narrowly technical geological specificity, we will not take the time and space to define but simply list — for the fun, mainly, of trying to mentally sound out words with combinations of vowels and consonants that we've not seen before: tares, rudera, deads, exerpta, lobule, scion, sarmentum, sporule, limature, tailings, talus slope, scobs, magistery, and flocculi.

See what I mean? They are fun to read but not easy to use.

Yes, I know, dear reader, this posting piles up more synonyms (44, not counting repeats) than there are pebbles you could hold in one hand.

But while hunting for synonyms for detritus — and in the process learning the multiple senses the word can accommodate — we have seen how variable selected thesauri be can be their in methods of classification and in the quantity of synonyms, with our small study finding 20 synonyms for detritus in the American Oxford, 10 in Sisson, and 83 in Roget.

I'm happy to have all three books on my shelf (plus 9 others of various titles, editions, and sizes). But if I had to make do with one, it would be the Oxford American Writer's Thesaurus, not just because it offers 20 immediately employable synonyms for detritus, but because, as Michael Dirda, winner of the 1993 Pulitzer Prize in criticism, states, the book is a

freshly conceived guide for finding just the right word, it's published by the greatest name in English reference books, and it offers thoughtful, amusing, and provocative mini-essays on 240 favorite words by nine distinguished writers.

I won't hide the facts that Didra is one of the very "distinguished writers" he touts and that his words are displayed on the backside of the book's paper jacket. Though used for promotional reasons, Dirdra's words, nonetheless, describe well the book's prominent assets.
#