Mary Kate and Ashley Olsen drew all the industry movers and shakers to the first runway show for the Row, their 3-year-old label that already sells at the world's top stores.

What makes the line so successful is its luxe louche-ness.

➢ Most of Irma La Douce was filmed on the back lot of the Goldwyn studio. They had put up a beautiful reproduction of a street near Les Halles--the shops, the bistros, the louche hotels. The most gorgeous starlets in town were cast as the whores. —cselfstyledsiren.blogspot.com 
•
Example sentences from the OED:


➢ You could play Snobby. I want a slim, louche, servant-girl-bigamist, half-handsome sort of rascal. —G. B. Shaw 1905

➢ There had seemed to be something a little louche in the way she had suddenly found herself alone with Ivor. —A. Huxley 1921

➢ As if he were an unfrocked priest due for reception into the world of the louche and the lost. — P. H. Johnson 1959

——————————————————————
A comment from Wordnik.com
Below is a fully ripened, "de-louce-ish" description of louche, which I found among the comments at Wordnik.com, an online dictionary of current English. Wordnik's goal is "to show you as much information as possible, as fast as we can find it, for every word in English, and to give you a place where you can make your own opinions about words known."  The lively comment you are about to read was written by a Wordnik contributor who uses the nom de blog "rolic," which, I am guessing, he or she borrowed from the word frolic. But I digress. On, now, to rolic's notions about louche:

Immoral, disreputable, decadent – none of these capture that sleazy yet elegant and brazenly androgynous seductiveness that is at the essence of louche. For me the embodiment of louche (and this is a word that demands to be written in italics, for no other reason than it can't be bothered to stand up straight) is the character "Joel Cairo" in The Maltese Falcon as played by the peerless Peter Lorre, an actor who almost always played louche.  —wordnik.com/words/louche/comments.

Peter Lorre in
The Maltese Falcon (1941) 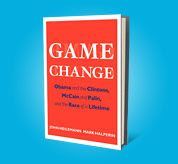 “Game Change: Obama and the Clintons, McCain and Palin, and the Race of a Lifetime,” by John Heilemann and Mark Halperin, New York: Harper, 2010.

Headline and subhead for The New Yorker book review:


To catch the reader's eye about a book review that accounts recent changes in English usage, from the civil to the louche, among political candidates, The New Yorker used a pun: "Louche Change," followed by the subhead "Trash talk from the 2008 Campaign."


"Louche Change" exemplifies a sub-category of the pun called paranomasia [PAR-a-no-MAY'-zia], the use of words alike in sound but different in meaning. The pun starts with (1) a paultry image of "loose change" in one's pocket or purse and then moves via the similar-yet-different mechanism of word-play to (2) a verbal change from proper English (downward) to louche English.


A trash-talk example: "This shit would be really interesting if we weren't in the middle of it." —Barack Obama, September 2008.