quaternary: fourth in a series

15C: from Latin quaterni: four each

To Astaire, the dance was primary — his main story — and he had it filmed accordingly. In Jackson's videos, the dance was tertiary, even quaternary (after the song and the story and the filming). The camera repeatedly cuts away, and, when it comes back, it often limits itself to the upper body. Jackson didn't value his dancing enough.

Readers unfamiliar with quaternary can easily enough discern its meaning in Acocella's sentence through a simple calculation: if song comes first, story second, and filming third, then dance must be fourth, or quaternary.

But after primary, secondary, tertiary, and quaternary, what comes fifth in the sequence, Fiftanary? Nicklenary? Afterfourthinary? Most of us do not know.

A good place to learn the answer to such a question is Ask the Experts at AskOxford.com, where, among the FAQs, we find this question, What comes after primary, secondary, tertiary?, and its answer:

But another question arises: Of what use is such an antique sequence of words in daily spoken discourse, especially when we have that efficient sequence of first, second, third, followed by fourth, fifth, sixth?
NUMBER WORDS IN ENGLISH

Before answering the question, it would be helpful to know precisely what kind of "number words" we are dealing with.

Quaternary is the fourth word in what is called an ordinal sequence, a sequence of numbers which tells us rank or position: 2nd best, 3rd fastest, 5th in line. As their name suggests — ordinals tell us the order of things.

Note that there are two other types of "number words" at work in our language: cardinal numbers and nominal numbers. Cardinal numbers, also called counting numbers, show quantity, telling us "how many": 5 fingers, 14 friends, 6 degrees of separation. Nominal numbers, which we could call specifiers, enable us to identify something numerically: jersey number 4; zip code 02116A; Macintosh operating system OS X — with X, here, working as the Roman numeral for 10.

Now, back to the ordinals, which, as we've seen, come in two sets.

The second opens with primary, followed, naturally enough, by secondary, but then moves on into less familiar territory with the terms tertiary and quaternary. Thereafter, we find ourselves looking down an arcane corridor of Latinate derivatives: quinary (5th), senary (6th), septenary (7th), to name but three of them.

OF WHAT USE IS THE LATINATE ORDINAL SEQUENCE?

Let's return, now, to our question: In daily spoken discourse, of what use is the Latinate ordinal sequence, which opens with primary, secondary, tertiary and continues with quaternary, quinary, senary?

The answer is threefold. Two of the words in the sequence are of primary utility; two others, of secondary utility; and the remainder, of scant utility.

We need primary because, besides meaning first, it can also designate "of chief importance, principal" and "not derived from caused by, or based on anything else." We need secondary, because besides meaning second, it can also designate "less important than, or resulting from someone or something else that is primary." These two words are rich with useful meanings. —The New Oxford American Dictionary

For daily speech, tertiary and quaternary can be useful when describing three or four elements, but best limit their use to what I would call "learned environments." These words are more at home in written rather than in spoken English.

I would value the remaining words in the ten-fold sequence, from the sixth to the tenth position, as being — each in its own place — merely, well, quinary, senary, septenary, octonary, nonary, or enary. As for the 12th and 20th positions — um — what were those words again?

QUATERNARY, IN THE DOMAINS OF GEOLOGY AND MATHEMATICS

Besides functioning as a number word, quaternary also defines certain geological and mathematical entities. To give the word its full lexicological due, then, here are its geological and chemical denotations as recorded in The New Oxford American Dictionary:

Geology of or relating to, or denoting the most recent period in the Cenozoic era, following the Tertiary period and comprising the Pleistocene and Holocene epochs (and thus including the present).

Chemistry denoting an ammonium compound containing a cation of the form NR4+, where R represents organic groups or atoms other than hydrogen. • (of a carbon atom) bonded to four other carbon atoms.

Finally, there is the quaternary Celtic knot, so called because it has four distinct sections within its design: 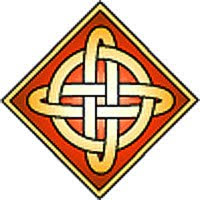 Avia Venefica, symbolism maven at Whats-Your-Sign.com, tells us that quaternary Celtic knot designs vary widely in meaning, depending upon the era and region of inception, as well on as the artist's intention. Meanings typically associated with Quaternary Celtic Knots include the following:

Finally, here they all are, in order, as if posing for a final photograph, the Latinate ordinals: