*
*New Century Dictionary
Like from a to z, its progenitorial synonym, from aardvark to zythum signifies

thoroughness in action, long suffering, or successful completion of a task or process.

From a to z, based on the analogy of the English alphabet, is a generic, uninventive phrase available for identifying any kind of continuum. From aardvark to zythum, on the other hand, with its intentional verbal (rather than alphabetic) content, gives it a particular aptitude for identifying continua that are of their essence verbal, including stories, essays and speeches in paper publications and hypertext displays — as in this example sentence from the OED:

You want to know the last time the Guardian..mentioned anything from aardvarks to zythum..then just a couple of seconds there it is: up on your screen. (1985 Guardian (Nexis 18 July).

aardvark as "the groundhog or earthpig of South Africa" &
zythum as "a kind of malt beer in ancient Egypt." [Hence this pronunciation suggestion for zythum:"Try some!"]

Most of us know that an aardvark is some sort of animal, many of us, even, that the word opens with a stutter of a's.
But ask anyone — except lexicographers and accomplished word mavens — what zythum means, and you get nary a word.
This is so, because, surprisingly, the definition of zythum is for most of us of less significance than is its location in many dictionaries, at the end. Preeminent among these lexicons is theOxford English Dictionary, where first we read its definition,

zythum — a kind of malt beer in ancient Egypt,

followed immediately by the reason most of us remember the word:

"Much of the word's continuing use is due to its status as the last word listed in several dictionaries."

For the record, here is the OED's sample sentence for the word zythum:
Synonyms: a to zed (British), top to bottom, top to toe, cap-a-pie, stem to stern, fore to aft.

For the thousands of years that the Egyptians were building pyramids they were brewing zythum to quench their thirsts, to satisfy their gods, nourish their appetites and to help them relax. ( Jrnl. (Newcastle) (Nexis) 8 June 28

WHEN TO USE AARDVARK TO ZYTHUM:

"From aardvark to zythum" gives us a literary alliterative to the cliche "from a to z" or, as the Brits put it, "from a to zed.

It's a phrase that's available when we are looking for an arch effect in a sentence, without causing any undue confusion for the reader. Were you to yawn through a blind date with a person lexically oblivious to the meaning and causes of, say, the the word "vapid," you could report the next day to your best friend:

I brought up topics (as I put it) from aardvark to zythum, but all [Mort or Mona]
could say is "Don't know much 'bout that" or "No kidding" or "Say wha?

If you have an a to z situation at hand in which your topic relates in some way to language,ideas, or publications, try saying

"I investigated every word in Willard Wordsworth's notebooks, from aardvark to zythum," rather than reverting to the bromidic from a to z, as in "I know of a guy who read the entire Oxford English Dictionary, from a to z." Zzzz.

•
This is not to say I dismiss the opinion that deployment of aardvark to zythum might strike a grandiloquent chime in some auditor's ears. Use aardvark to zythum only in situations where you sense that your reader or listener is savvy to your word play.
•
AARDVARK TO ZYTHUM in the subtitle of Bennet Cerf's Good for a Laugh:
Bennet Cerf, television and book-world wit of the early 1950's, published a book titled Good for a Laugh, to which he added, for added kick (from animal or brew), this subtitle:

A New Collection of Humorous Tidbits and Anecdotes from Aardvark to Zythum.

I told you it was a literary word.
•
The elegant renditions of the letters A and Z at the beginning of this posting come from the Century Dictionary (1891), a historical lexicon that any logophle worth his or her bookmarks — paper or digital — visits regularly online, for its historical scholarship, comprehensive scope, and refined, sumptuous wood-engraved illustrations.
Wikipedia reports:

The Century Dictionary and Cyclopedia was one of the largest and most highly regarded dictionaries of the English language. The first edition was published from 1889 to 1891 by the Century Company of New York, in six, eight, or ten volume versions (originally issued in 24 fascicles) in 7,046 pages with some 10,000 wood-engraved illustrations. 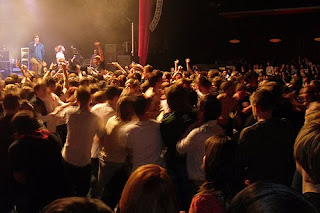 FROM THE COMPACT OXFORD ENGLISH DICTIONARY:

1 reproduce or spread so as to become very widespread.

2 teem with life and activity.

▸ verb: be teeming, be abuzz ("Her mind pullulated with worries")

PULLULATE IN USE: DESCRIBING A MOSH PIT

mosh pit: Mosh is a type of dance. Moshing is typically done in a mosh pit or circle pit. —Answers.com.

Come December, [director Michael Haneke's film "The White Ribbon"] will go into general release, though the chances of its landing in your local multiplex are slim — no great loss, in the eyes of the director, for whom the modern movie theatre is a pullulating mosh pit. "I hate the smell of popcorn," he told me, adding, "I rarely go to the cinema."—Anthony Lane. "Happy Haneke: Michael Haneke and his movies," The New Yorker, Oct. 5, 2009, 60.

PULLULATE IN USE: DESCRIBING A WRITER'S SENTENCE STYLE

[Martin] Amis [in his novel Money] throws out coinages like a slot-machine paying out: John Self's dispirited, sagging apartment is "the Sock", a haircut is "a rug-rethink". There are sentences that pullulate with excess, descriptions that hum with mad vitality. Self moans: "By now I am a crackling sorcerer of grub and booze." — Martin, Tim. "Amis's 'Money': An unfilmable book? There's no such thing." Telegraph.co.uk, Nov. 12, 2009.

There’s a story about Cairo: that one day they pulled down the wall of an empty lot to find 50,000 people living inside, hitherto unsuspected. A walk through the pullulating streets of the Islamic Quarter (nearest metro Ataba) shows you just how crowded the city can be. Prepare for sensory overload, as soap-sellers, silversmiths and spice merchants foist their wares upon you between the hammams, caravanserai (roadside inns) and tea shops. —Sean Thomas. "Cairo: The Complete Guide," Times Online, Sept. 18, 2008.

PULLULATING IN USE: DESCRIBING AN ART OBJECT

I greatly enjoy creating patterns and symmetries, but machines will always create more perfect ones. So I also enjoy “busting up” or disrupting these patterns in various ways. In this piece, I have used a great many small objects, both industrial and decorative, to produce an extruded mosaic that is simply pullulating with patterns. The overall impression is one of order and harmony, but a closer inspection reveals an abundance of dislocations and asymmetries. —Douglas Remy, Doremiarts.com.

With such "energetic" definitions as breed freely and abundantly; increase rapidly;produce buds, branches, or germinate; move in large numbers; be teeming, be abuzz, as well as such synonyms as bourgeon, germinate, shoot, sprout, spud, pour, stream, swarm, and teem (WordNet), the verb pullulate veritably hums with unique intensity and imminent expectation.

That charged dynamic makes it attractive to writers who engage in the excesses the euphuistic style of writing. We're not talking here about euphemism — substituting an inoffensive or mild expression for one that may offend or suggest something unpleasant — or euphony — combinations of words pleasing to the ear. We're talking about euphuism [e yoo' foo ism] which, as Garner reports,

Unlike the well-tempered sentences above (describing a style of writing, a mosh pit, the streets of Cairo, and a work of art), the sample sentences that follow (describing a Canadian rock band and a former President of the United States) will come across, I'm sure you'll notice, as feverish and forced, using intensified vocabularies —energized here and there by the verb pullulate — each writer aiming for an overtone that is energetic in its pace and almost ecstatic in its urgency. (Yes, I know: that last sentence itself borders on or, perhaps, even crosses over into the euphuistic mode.) 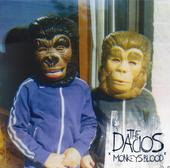 Permanently stimulated by a synapse twisting brew of rock n’ roll sour mash, The Dacios [a Canadian rock band] are esteemed for their white-heat live performances.

But there’s more to this [band] than the brain pulverising roar of a supercharged V12 running full throttle through a nuclear junkyard. Linda J’s lyrical concoctions are a virulent antivenom which she expectorates in heaving torrents against the darkening forces of urban banality. Her unflinching psychic insights wrench the cancerous lesions of modern life into the glare and splay love’s ordeals on a dissection table like so many toads, their entrails pullulating with rheumy ooze. 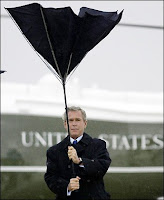 George W. Bush, you condemnable addlebrained purulent flunk. If there is such a thing as hell you and that sallow malignancy Richard Cheney should be confined to it. To a creep feeder in hell. And each hellish afternon hosed down with pigwash. And every hellish evening left to fall asleep, biting each other, on a pullulating bed of chattering flesh fly larvae. —Corrente.blogspot.com.

Though euphuistic sentences such as these move forward a-wrenching and a-puffing, laboring and belaboring points in extremis, I find they can, in small doses, be fun to read, even if only to smile at the romping enthusiasm of their authors.

The editors at mnemonicdictionary.com offer this tip on remembering the meaning of pullulate: "Think of pollination, [which] spreads freely and abundantly."

Posted by John Horlivy at Tuesday, November 17, 2009 No comments: