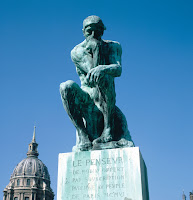 The Ratiocinator or,
more properly,
The Thinker,
bronze sculpture

Garden of the Rodin Museum, Paris

form judgments by a process of logic; reason.—IOAD

Ratiocination is reasoning, the process of exact of logical thinking.


The primary stress falls on the penultimate — next to the last — syllable, with lighter accents on the first and third syllables: RASH-ee-AHS-i-NAY-shin.


—Charles Harrington Elster.  There is No Zoo in Zoology and Other Beastly Mispronunciations. New York: Collier Books, 1988, 127.

[Sherlock] Holmes's famous ratiocination is now at the service of the man of action. In slow motion, we see the fighting techniques he plans to use against an opponent (he narrates the blows for us, insisting on the logical rightness of each one); then we see his attack again, in lightning-quick flashes.—David Denby, The Current Cinema, "Sherlock Holmes," The New Yorker, Jan. 4 2010, 76.

Obama needs to craft a strong story, and fast, if he expects to be able to accomplish anything in the three years that remain. His opponents are hard at work smithing their stories, and Obama soon might find himself surrounded on all sides by crude powerful tales that no amount of ratiocination will be able to dispel. The President needs to remember his post’s true vocation: that of the Storyteller-in-Chief.—Junot Diaz"One Year: Storyteller-in-Chief," January 20, 2010  (newyorker.com/online/blogs/newsdesk).

For all their vaunted powers of ratiocination, grand masters of chess tend to be a skittery lot. – “People”, Time (clutchmagonline.com) 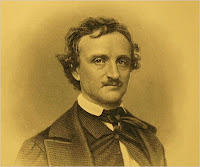 mmBut . . . Poe never conceived of the Dupin stories as belonging to the genre of detective fiction; he never referred to them as such. Rather he used the term "tales of ratiocination" in order to emphasize the delineation of a chain of logical reasoning and analysis. For him, the detective was not the central focus of the story, but a vehicle for tracing a train of thought, and the tale itself a way to analyze, "that moral activity which disentangles" as he writes in his prefatory comments to "The Murders in the Rue Morgue." It was an interest in logic and not in the personality of the fictional detective that led Poe to write his detective fiction. He left it to others, notably Sir Arthur Conan Doyle, to explore the character of the detective, of which his deductive methods would be but one facet.—Stephen Rachman, "Edgar Alan Poe and the Origins of Mystery Fiction (strandmag.com/poe.htm)

THE HEART OF RATIOCINATION: THE SYLLOGISM


In A System of Logic, Ratiocinative and Inductive, John Stuart Mills asserted the essential    connection between ratiocination and the syllogism: "There is a [narrow] sense, in which the name reasoning is confined to the form of inference which is termed ratiocination, and of which the syllogism is the general type."

Remember the syllogism in Composition and Rhetoric 101?  If not, read on.

The first one I ever deliberately learned was

The three sentences made simple, obvious sense, and I thought no more about them.  I was then quite surprised, in my undergraduate naivete, to learn that someone actually had to invent such an arrangement of words and sentences, as well as phalanxes of rules to support it.

I learned that each of the statements had a name:

mmMajor premise: All humans are mortal.

mmMinor premise: Socrates is a human.

I learned how the syllogism could be rendered symbolically using the alphabet, like this

and how critical it was that the a's, b's, and c's  all appear in the order presented here,  the two a's aligned in crosswise position, making it possible to equate c with b.

I then wondered who it was that had invented such a powerful design for reason.

Before long, I learned that "[t]he oldest surviving writing to explicitly consider the rules by which reason operates," as Wikipedia recounts it,


are the works of the Greek philosopher Aristotle, especially Prior Analysis and Posterior Analysis. Although the Ancient Greeks had no separate word for logic as distinct from language and reason, Aristotle's newly coined word "syllogism" (syllogismos) identified logic clearly for the first time as a distinct field of study. When Aristotle referred to "the logical" (hê logikê), he was referring more broadly to rational thought,

In closing, I offer this syllogism of my own making in homage to the form's brilliant inventor:

The inventor of the syllogism can rightly be called the Founder of Ratiocination.

Therefore, Aristotle can rightly be called the Founder of Ratiocination. 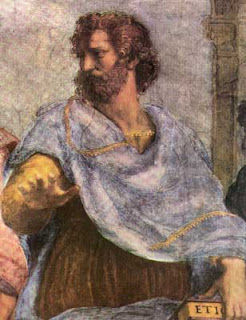 Ratiocinator in Chief:
Aristotle. A detail from the fresco
The School of Athens by Raphael.
gap-systems.org

Posted by John Horlivy at Tuesday, January 26, 2010 No comments: