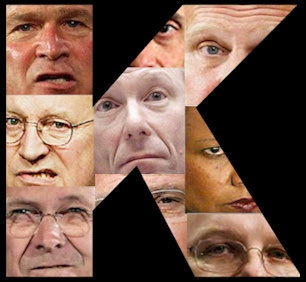 Government by the least qualified or most undesirable citizens.
The Hutchinson Encyclopedia
•

On June 4, 2007 a blogger using the nom de blog "philinmaine" at the Daily Kos, a lefty weblog if there ever was one, posted a piece titled

"Welcome to the kakistocracy: Any way you spell it, we're living in it"

the recent National Spelling Bee. A word that's lingered in obscurity for a century — a word we all really need today — wiggled back into the public discourse, thanks to Isabel Jacobson, a 14 year old spelling champion from Madison, Wisconsin. She mentioned that her favorite difficult word was kakistocracy.

———————————————————
We hope as people start to see it on bumpers, a few will look it up, and heads will start to nod in agreement. It should incite some lively parking lot conversations, too! Around 70% of the people will agree: we live in a kakistocracy. 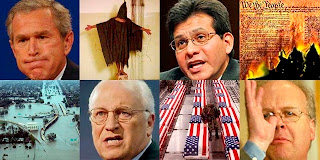 From the Greek kakistos [worst] + -cracy [-rule], on the model of the word aristocracy.

The Online Oxford English Dictionary
•
From what English grammarians call the superlative form of "worst" (kakistos), let's shift our attention, now, to the basic, or what they call the positive form, namely, the word "bad," which in Greek is kakos, sometimes spelled cakos or cak.

Here are a just a few of what I call "caco-combinations" that you are likely to encounter, especially in medical, academic, or fine arts settings:

mmAn irresistible urge to do something inadvisable.

N.B. See the references later in the blog to cacoethes loquendi and cacoethes seribendi as described in Brewer's Dictionary of Phrase and Fable.
•

We should note also that the Online Etymology Dictionary reports that the baby-talk word "ka-ka"— a.k.a. "doo-doo," "poo-poo," or the variant "hu-ka" (used in my family of origin) — goes way back in the history of English:

Kako- was a common prefix in Greek, and has often crossed over into English., e.g. cacography, the opposite of calligraphy [ ]. Etymologists connect it with PIE* kakka- "to defecate."

*English is an Indo-European "daughter" language to the parent Proto-Indo-European Language (PIE), which was spoke by people who lived in Southwest Russia around 4,000 to 5,000 BCE.

A History of English by Barbara A. Fennell

1] — AlphaDictionary.com, on its "Corrected List of Manias - Fears, Loves, Obsessions," aptly defines cacomania as an obsession with ugliness.

2] Bloggin' John offers cacomania as a nonce word designed precisely for the occasion of this posting. To wit, cacomania is a strong interest in but not quite an obsession with words formed with the caco- combining form.

Three word mavins who have done the requisite searching and researching of caco- terms to deserve the honorific "Caco-Form-Competent" are Paul Dickson, Charles Harrinton Elster, and Robert H. Hill.

Presenting himself as perhaps the most inventive and adventuresome of the three, Dickson, in his Word Treasury: A Connoisseur's Collection of Old and New, Weird and Wonderful, Useful and Outlandish Words (1992) shows us a rarely seen word and offers cogent reasons for its need:

Cacophenism [cac-o-feen'-ism] Using a harsh or cruel expression where a milder one would be proper; the opposite of euphemism. Some would argue that dysphemism is another opposite—albeit in the other direction—of euphemism. Using a disparaging or belittling term to describe something that deserves more is a dysphemism. It is, for instance, dysphemism to speak of a mansion as a shack or a BMW as a jalopy. (38) —Dickson's Word Treasury. New York: Wiley.

For Dickson denigration admits of degrees. If sweet is euphemistic, cloying would be dysphemistic, and

Perhaps the three phrases derived from the caco- form that you will likely encounter are well described in Brewer's Dictionary of Phrase & Fable:

cacode'mon [kak-o-de'-mon] An evil spirit. Astrologers gave this name to The Twelfth House of Heaven, from which only evil prognostics [advance indications or portents of a future event] proceed.
"Hie thee to hell for shame, and leave the world, / Thou cacodemon." — Shakespeare: Richard III., i,3.
•
cacoe'thes. [ka-ko-ee'•theez] A "bad habit"
mmcacoe'thes loquen'di. [lo-kwen'-di] A passion for making speech or for talking.
•
mmcacoe'thes scriben'di. [scri-ben'-di] The love of rushing into print; a mania for authorship.
Brewer The Dictionary of Phrase & Fable.
Ware, Hertfordshire: Wordsworth Edition Ltd., 1993, 196.
•
Finally, in the domain of classical rhetoric—notoriously replete with terminology derived from Greek and Roman roots—we have this foursome of caco- categories, as recounted by Richard Lanham in his redoubtable Handlist of Rhetorical Terms:

Cacemphaton (cac EM pha ton; Greek. "ill sounding")
mm1. Scurrilous jest; lewd allusion or double entendre, as when the blues singer Big Bill Broonzy sings, "I'm gonna squeeze your lemon, baby, 'till the good juice comes."
mm2. Sounds combined for harsh effect. So [Henry] Peacham [author of The Garden of Eloquence]: "when there come many syllables of one sound together in one sentence, like a continual jarring upon one string, thus, neither honour nor nobility, could move a naughty, niggardly* noddy."

*niggardly: adv. archaic often offensive in a stingy or meager manner.
USAGE NOTE: "Niggard n. a stingy or ungenerous person (often offensive) . . . along with its adverbial form niggardly, should be used with caution. Owing to the sound similarity to the highly inflammatory racial epithet nigger, these words can cause unnecessary confusion and unintentional offense.
•
Cacosistation (ca co SIS ta ton; Greek. "badly constructed").
mmAn argument that can serve as well on either side of a question.
•
Cacosyntheton (ca co SYN the ton) Greek. "ill-composed").
mmAwkward transposition of the parts of a sentence. Puttenham's example: "In my years lusty, many a deed doughty did I." Or Churchill's famous "This is the kind of nonsense up with which I shall not put." Or, as in this only partially successful syntactical gymnastic from Kingsley Amis's I Want it Now: "Now and again it felt rather like that. It was now, or again, now."
•
Cacozelia (ca co ZE li a; Greek. "unhappy imitation; affectation")
mmStudied affectation of style; affected diction made up of adaptation of Latin words or inkhorn terms, as when Hamlet paroies Osric: . . .