Funambulist Florent Blondeau walking
on red wires above Budapest, Hungary, in
a television commercial for The Economist.
To view the commercial on YouTube, click here.

‣ A tightrope or slackrope walker

funambulatory, adj. of or pertaining to rope-dancing; that walks on a tightrope. —Shorter OED

Besides tightrope walker, we can use the more general term,

‣One who is skilled in feats of ‘balancing’; esp. a rope-walker, acrobat.

Let us consider the following two-sentence sequence recently posted on the eponymous Copyranter blog whose author is a self-described "NYC advertising copywriter for 17 years, all at the the same ad agency":

Widely considered to be the smartest business publication in the world, The Economist aired its first TV commercial in eight years over the weekend in England. Tagged “Let Your Mind Wander,” it features French tightrope artist (funambulist) Florent Blondeau walking on red wires above Budapest, Hungary. —Copyranter, on July 6, 2009 at 11:38 AM.

In parentheses, Copyranter includes the word funambulist as a link to TheFreeDictionary.com, which duly define it as "one who performs on a tightrope or a slack rope."

THE USES OF FUNAMBULIST AS AN IMAGE

Besides serving as a synonym for tightrope walker or equilibrist, one might rightly ask, "Of what further use is the word funambulist?"

The answer is that the image of skill, risk, and reward represented by the funambulist can work powerfully in a conceptual metaphor designed to interpret another topic — a topic such as the intended message of a television commercial for The Economist magazine.

(Later, this posting will present explanations of how Nineteenth Century writers Friedrich Wilhelm Nietzsche and Johan Wolfgang von Goethe employed the funambulist image to comment inventively, each in his own way, on the human experience. But for now, if you are interested in exploring how the "reader of The Economist as funambulist" trope plays out, read on.)

A linguist would tell us that in The Economist's promotion, the funambulist image works as part of a conceptual metaphor, a "mapping" of details and features from a "source domain" — in our case, the domain of the funambulist — onto corresponding details and features of a "target domain," — a potential reader of The Economist. The linguist would express this conceptual metaphor (in capital letters) as an "A IS B" statement, specifically, THE READER OF THE ECONOMIST IS A FUNAMBULIST or, more simply: THE READER IS A FUNAMBULIST.

To understand the contrasting interpretations of THE READER IS A FUNAMBULIST commercial made by Copyranter and The Economist, we must look beyond funambulist as a defined concept to funambulist as a dynamic image — a dramatic scene of high intensity, discipline, risk, and reward. With such a rich cluster of conditions, motives, and features, or, as linguists call them collectively, entailments, the image of the funambulist has, not surprisingly, been explored in conceptual metaphors by thinkers and writers over the centuries, in particular, as we have already mentioned, Friedrich Wilhelm Nietzsche and Johann Wolfgang von Goethe (about whom, more later). Using the funambulistic image, they explored such lofty issues as the nature of the artist, the quest for human freedom, and the place of humankind in the universe.

What Copyranter sees in the commercial and what The Economist wants him to see are in no way linked. They are like two isolated steel loops, each anchored high up on its own pole under a circus tent — with no high-wire connecting them.

Copyranter sees the ad as pastiche of uncertainties:

Well, I’ve let my mind wander, and what it tells me is: if you’re going to make me sit through a minute of basically boring, low-level tightrope walking, you better pay it off with some excitement or irony or a face splat or something that makes me think “a-ha.” This makes me think about ripping a copy of your magazine into shreds.

Copyranter identifies the funambulist as an investor walking a narrow line across a high risk situation — in a taut drama, with every expectation that something untoward is about to happen. Of course, nothing much happens, except the closing image of red tightropes upon which have been imprinted in white letters the tag line "Let your mind wander."

A spokesperson for The Economist, thinks otherwise, suggesting that the tagline "Let Your Mind Wander" is “a metaphor for the inherent pleasure in connecting different ideas, and how this is reflected in the wide-range news and analysis available in a copy of The Economist.”

For The Economist, the image of the funambulist on high wires above Budapest represents a confident reader of the magazine who is walking a safe line — the magazine's line — from one financial possibility to another — the buildings standing as anchors at either end of the rope.

It falls to the metaphor's inventor to do somehow to draw the observer's attention to the significant shared entailments of the metaphor's two parts. The magazine sees the footage of the funambulist in narrow conceptual terms, trusting the words "Let your mind wander" to be apt and sufficient enough to help the viewer synapse this idea: "As a reader of the Economist, I could make important financial connections." Unfortunately for the magazine, their narrow intellectual view of the funabulist's circumstance was backgrounded (or never did show up) for Copyranter as well for as this writer, by the foregrounded scene of precarious drama, and we failed to catch their drift. But we are only two observers among The Economist's intended audience.

From the Nineteenth Century: Two Classic Interpretations of the Funambulist Image

In brief, Johann Wolfgang von Goethe (1749-1832) imagined how the tightrope walker has the power "to rouse assembled thousands into such rapture" that "their stagnant nature [was set] into movement, free, vehement, and pure!," while Friedrich Wilhelm Nietzsche (1844-1900) admired the funambulist as the "affirmer" who stands in opposition to the clown, the "skeptic."

Those readers interested in learning with a bit more specificity what Nietzsche and Goethe had to say about the funambulist image are invited to read the following excerpt from Step Right Up: The Adventures of Circus in America: 1793 - 1940 (1990) by LaVahn G. Hoh & William H. Rough:

Despite the technical Latin name of "funambulist" -- rope-walker -- tightropes have rarely been ropes since hemp was replaced with copper wire in 1858. Today they are usually 5/8th-inch cables of tightly wound steel strands. For that matter, tightropes haven't necessarily been tight either. But in one form or another, rope-walking is one of the oldest of "circus" entertainments. Wire-walking is a universal tradition which spans thousands of years and many widely diverse cultures.

The great wire-walker, like the great trapeze artist, offers stunning images of man surviving, even excelling, in a hostile environment of precision, balance and fear, far beyond the scope of where most of us think we can reach. It is little wonder that those images have been so often used by writers and artists to explore the questions of man's metaphysical place in the universe, the nature of the artist, and the quest for human freedom.

In Also Sprach Zarathustra, Nietzsche wrote that man is a "rope strung between animal and superman, a rope above an abyss." The wire walker and the trickster clown who can make him fall represent the two great opposing forces in mankind: the affirmer and the skeptic.

In Goethe's Wilhelm Meisters Lehrjahre, Wilhelm observes and marvels at the paradox of the tightrope-walkers:

What a precious emotion would it give, if one could disseminate generous, exalted, manly feelings with electric force and speed, and rouse assembled thousands into such rapture as these people, by their bodily alertness, have done! If one could communicate to thronging multitudes a fellow-feeling in all that belongs to man by the portraying of happiness and misery, of wisdom and folly, nay of absurdity and silliness.

From The Adventures of Circus in America / by LaVahn G. Hoh & William H. Rough; encoded by Kristin L. Amacker. Electronic edition Charlottesville: Institute for Advanced Technology in the Humanities, ©2004.

Posted by John Horlivy at Thursday, August 13, 2009 No comments:

is known to have said:

"I have never let my schooling

interfere with my education."

autodidact: a person who is self-taught

autodidactic: self-taught; of or pertaining to self-teaching

These words derive from the Greek combination auto + didactic, in which auto- means self and didactic means having the character or manner of a teacher; intended to instruct.

The word for self-taught in Greek is autodidaktos.

didactically — adverb: in an autodidactic manner

didacticism — noun: the practice or quality of being didactic

has a sense of extreme autodicacticism, a kind of focus and relentlessness and unavoidability that, through sheer immediacy and constancy, forces everybody to acknowledge it and deal with and talk to Smith. Smith ends up being the only one as interested in what his sources are doing as they themselves are. — Michael Wolff. "Politio's Washington Coup" Vanity Fair p 76 August 2009.

Smith 32, lives in Brooklyn with his wife and two children (with a third about to be), and is, too, a total dweeb. His blog, which he started at The New York Observer, then moved to the Daily News, and then to Politico, is another new journalism model.

A synonym for autodidact is automath: a self-taught person, an autodidact — derived from auto, self, and math, learned. "Those Automaths, those self taught Philosophers." 1759 YOUNG Conject. Orig. Comp.292. — OED

ASSOCIATED TERMS: words that are often associated with autodidact but which are not precisely synomymic.

When we think of a person who is an autodidact or automath, we consider two concepts: (1) self-energy that has produced (2) much learning.

If we know of a person who has acquired much learning, but don't know whether the learning was self-initiated or credentialized, we can use the term

polymath, a person of great and varied learning.

The Etymological Dictionary tells us the word comes from the Greek poly-, signifying much, + math, signifying learn.—ww.etymonline.com.

Similar to polymath is polyhistor, which J. N. Hooks in The Grand Panjandrum states, is

a person with vast, almost encyclopedic learning. Polymath is derived from Greek words meaning much learning, polyhistor, from Greek for much knowing. — New York: Macmillan, 1919. 15.

There are websites for everything these days, including autodidacts. One of these sites, Autodidactic Press (at autodidactic.com), dedicates itself, not surprisingly, to the propositions

• That lifelong learning is fundamental to living a full and interesting life.

• That the learning necessary to gain competence in a job or career is far, far more important than how or where it is acquired.

The site lists alphabetically — from Abigail Adams to Chuck Yeager — 184 persons whom its editors consider to be premier autodidacts. Here are the A's on their list (with each name, here, available as a link to a brief biography of the person on the Autodidactic Press website):

FINALLY, WHAT DO PHILOMATH AND GOLIARD MEAN?

Two other words that are really only tangentially related to autodidact but which are, nonetheless, of word-mavenly interest, are the refined philomath and the rowdy goliard.

If the learned among you are, happily, not given to goliardy, you could refer to one of them using one of the words described earlier in this post, or try savant, defined, by The Little Oxford Dictionary, as a "learned person" or pundit, as a "learned Hindu; expert." 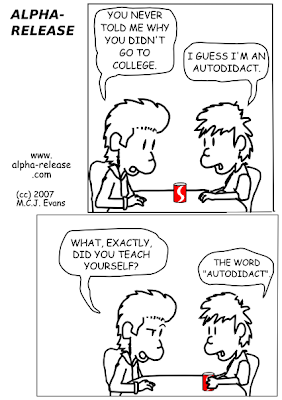