Rigid, hard, unyielding,
In use:

In willingly taking up the two-edged sword of maverickism; in spelling out his frequent flights against the sclerotic, cosy two-party establishment; in zinging that “big-spending, do-nothing, me-first-country-second Washington crowd”; in the new media adulation of his smoothly delivered acceptance extravaganza, [Senator John\ McCain stiffly stole the clothes of change. — William Safire, “The Maverick Ticket,” New York Times, Sunday Opinion, Sept. 7, 2008. 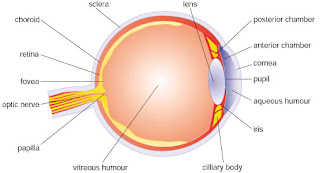 [The term Sclera, with its line indicator,
appears in the drawing's upper left quadrant.]

"The Sclera is opaque and makes up 5 sixths of the outer layer of the
eyeball. It is visible between the eyelids as the white of the eye."
(www.best4glasses.co.uk/images/eyeball)

Most users of American English rarely see the word sclerotic, much less use it, as does William Safire so effectively above in his characterization of the "cozy two-party establishment" in Washington.

Why effective? Because the original medical sense of sclerotic denotes the hardness of the outermost layer of the eyeball. Thus with a word-wise wink, Safire, ever the word-meister, describes the modern American political party with the subtle yet apt metaphoric image of the human eyeball — tough, white-hued (pure?), slick, smooth, and ever-shifting (shifty?) as it peers upon the American political scene.
•
A Tangential Add-on:
Speaking of the eyeball as an image with potential entailments relative to the human condition, you are invited to click the tab below to read a short deferential piece devoted to America's preiminent eyeball: Ralph Waldo Emerson's "Transparent Eyeball" in his philosophical text Nature:
Standing on the bare ground,— my head
bathed by the blithe air, & uplifted into
infinite space,— all mean egotism
vanishes. I become a Transparent
Eyeball!

"While not exactly an image of Emerson, the "transparent eyeball" based on Christopher Pearse Cranch’s caricature of a passage from Nature, is famously associated with him" (Ralph Waldo Emerson Society, cas.sc.edu/engl/emerson ).