penumbra n.
1. A partial shadow, as in an eclipse, between regions of complete

2. The grayish outer part of a sunspot.

3. An area in which something exists to a lesser or uncertain degree:
“The First Amendment has a penumbra where privacy is protected from governmental intrusion” (Joseph A. Califano, Jr.).

An 'umbra' is a region of shadow caused by the total obscuring of a light source by an opaque body [i.e., one impervious to the rays of

visible light]. . . . A 'penumbra' is a partial shadow cast in the same way but obscuring the light source. . . . 'Umbra' is simply Latin for 'shadow'; the 'pen-' of 'penumbra' means 'almost (Latin paene), in the same way as for a 'peninsula', which is 'almost an island.'

The word penumbra caught my attention while reading the story of the annihilation of the volcano-island Krakatoa and the huge ensuing tsunami that killed nearly forth thousand people in Krakatoa: The Day the World Exploded, August 27, 1888 by Simon Winchester, a meticulous researcher and superb stylist.

In the chapter titled "Close Encounters on the Wallace Line," Wincester claims (with convincing evidence) that geographer "Alfred 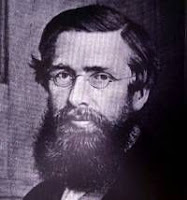 Russel Wallace [ pictured at right ], along side Charles Darwin but always as his satellite, is the other true but largely unremembered pioneer of the science of evolution" (56). In this chapter Winchester uses three metaphors to highlight Wallace's significant discoveries and unfortunate rare recognition for them. The most striking of the metaphors makes use of penumbra.

The first metaphor you've already read above, in which Wallace is likened to a satellite within the gravitational pull of Darwin, the planet. The second metaphor is of a higher rank, I'd suggest, because it is attached to a statement of Wallace's independent development of two of the key principles of evolutionary theory. Here we have a penumbral image of diminishing shadow, in which Fame, which is likened to a beacon, casts its bright favor directly upon Darwin, leaving Wallace to stand in the penumbra:

[Wallace's] keen conviction remained, for all of the eight years he spent there [the East Indies], that evidence could be found in this archipelago would substantiate his two growing beliefs: that geography was highly influential in the development of biology, and that species originated by the natural selection of favored types from within the variations of any population. He spent the better part of his life seeking to prove both points--and by and large (and in the penumbra of Charles Darwin) he succeeded magnificently (58).

(A quirky thought in passing: What if Wallace had somehow landed within Darwin's umbra? As I investigate the metaphor more closely in terms of its etiology (the study of causation), I . . . well . . . I suppose there would be no Alfred Russel Wallace to write or read about. Nevermind.)

The third metaphor involves Winchester's use of punctuation and has nothing directly to do with penumbra. So skip this paragraph and the next if you like. Or read on: The third metaphor likens life to the syntax of a sentence, with Darwin written into choice places, Wallace into less choice places. Notice how Winchester locates Wallace not only metaphorically within the "penumbra of Charles Darwin" but also, grammatically, within the shadows of reductive punctuation, namely, the enclosures of parentheses, suggesting, thereby, symbolically (so to speak) that history presents Darwin "writ large," but Wallace only parenthetically. (A few pages later, Winchester repeats the trope of parentheses, this time drawing the reader's attention to it: "Darwin's discoveries (along with those of Wallace, naturally--these very parentheses serving to remind us how simple it is still to overlook the dyer's son from Usk) had overturned so much of man's own certainty about his own beginnings." (68)

If you skipped the last two paragraph, welcome back.

The designer of Penumbra (1994)--Lance Hidy--describes it as "an ‘androgynous’ letterform which morphs between the worlds of sans serif and serif" and between the extremes "of contemporary and traditional qualities." Both the concept of morphing between extremes and the state of androgyny work on the analogy of the "unbra to penumbra to light" continuum.

Lest you think that everything touched by the word penumbra finds itself cast in shadow, consider the bright image of the Penumbra (Primula polyanthus).

" . . . the curious slim edge of cool light that shows around the moon during an eclipse.
•
"The first silver laced primula to be commercially available, ‘Penumbra’ is a dramatic companion for the old fashioned gold laced primrose that has been available for centuries.

"Named for the curious slim edge of cool light that shows around the moon during an eclipse, ‘Penumbra’ grows to 10" and is heavenly in woodland gardens. Fragrant ‘Penumbra’ flowers from February to June and is hardy to zone 4."
--www.loghouseplants.com/ Plant%20Curiosities.htm

The OED suggests that bloviate is probably a conjoining (or collocation, as eytmologists prefer) of the verb blow and the affix -viate (as in e.g. deviate., abbreviate), where blow is the "motion or action of the wind, or of an aerial current, as in 'it blows hard,' 'it blew a gale, a hurricane,' to blow great guns: to blow a violent gale; to blow up; to rise, increase in force of blowing."

ment or
drastic shift of position in such an oration, but more often
he merely talks, or, as [Warren G.] Harding [picture at right] put it, ‘bloviates’, being concerned more with the political effect of his remarks than with their meaning."--1957 Amer. Hist. Rev. 62 1014.

Chávez seems enamored of the sound of his own voice, and he has an unpopular habit of taking over Venezuela's TV and radio stations to bloviate about his reforms.-- 2002 Mother Jones May-June 82/2.

The story is that President Warren G. Harding, a notoriously flawed public speaker, coined the words normalcy and bloviate. Though he simply revived an erstwhile dying version of the word "normality" (no

small feat), he probably did invent the devilishly clever word "bloviate." Those distinctions aside, Harding's public career is remembered best for his bad speeches, oversight (in both senses) of rampant corruption, and well-known philandering.

John Ashbery uses "bloviate" in his poem "Qualm" about Warren G. Harding. The poem speaks of Harding's final moments in the arms of his long-suffering wife, following an arduous train trip to Alaska. Here are the opening stanzas:
Qualm
By John Ashbury
Warren G. Harding invented the word "normalcy,"
Also the lesser-known "bloviate," meaning, one imagines,
To spout, to spew aimless verbiage. He never wanted to be President.
The "Ohio Gang" made him. He died in the Palace

Hotel in San Francisco, coming back from Alaska,
As his wife was reading to him, about him,
From The Saturday Evening Post. Poor Warren. He wasn't a bad egg,
Just weak. He loved women and Ohio

In his thoroughly encompassing scorching style, Social Critic and etymologist H. L. Mencken had this to say about Harding's oratorical infelicities [in- = "not-" + felix = "happy"]:

That is to say, he [Warren G. Harding] writes the worst English that I have ever encountered. It reminds me of a string of wet sponges; it reminds me of tattered washing on the line; it reminds me of stale bean soup, of college yells, of dogs barking idiotically through endless nights. It is so bad that a sort of grandeur creeps into it. It drags itself out of the dark abysm (I was about to write abscess!) of pish, and crawls insanely up the topmost pinnacle of posh. It is rumble and bumble. It is flap and doodle. It is balder and dash.

Back in April of 1998, I had already collected a fair number of word-books, thesauri, and dictionaries. But I did not have the Random House Webster's College Dictionary (keep this in mind). Being interested in the word bloviate, I checked all of my main stream dictionaries (mostly, from the houses of Merriam-Webster and American Heritage), but could find nary a reference to the word. Blithely assuming (but without checking) that Random House had also ignored the word, I sent a smirky question about the apparently lost and wandering bloviate to Jesse Sheidlower, who at the time--before his present work as Editor-at-Large for the Oxford English Dictionary--was working for Random House as the keeper of the interactive website "Jesse's Word of the Day."
____________________________________________________
JOHN'S QUESTION & JESSE'S ANSWER

John . . . writes: The word "bloviate" is now more evident on the Web (put it into a search engine sometime), in discussion groups (check out NYT's "Etymology"), and in specialty dictionaries than it is in mainstream lexicons. How much of a current presence does a word need to appear in a modern dictionary?

[Jesse Sheidlower answers:] What, like the Random House Webster's College Dictionary, which has an entry for bloviate with the definition 'to speak pompously'? It doesn't need any more currency, since the word has quite a bit and it's already in this dictionary. If you're using one of those other dictionaries, with generally poorer coverage of current vocabulary, well, that I can't help you with.

There has been quite a vogue in recent years for bloviate, particularly in political discourse. Rush Limbaugh, according to one source, "chortles, crows, bloviates and denounces; but there is always an undercurrent of self-deprecating humor that makes his elephantine egotism bearable." Uh-huh. "In Washington," another source tells us, men "talk too much. Everywhere you look, there are men talking. It's like a giant Bloviation Bee."

Bloviate is not, however, a recent creation. It was apparently coined in the mid-nineteenth century and was found in slang dictionaries by the end of the nineteenth century. Some of the early examples still strike the modern ear as contemporary sounding; the Literary Digest in 1909 derided a proposal to create a state of Los Angeles, "which would rid California of a maximum of bluster and bloviation and a minimum of territory." Hmm, still sounds viable. But bloviate was chiefly popularized by President Warren G. Harding in the early 1920s, and current examples often mention him as the inspiration for the word.
The word bloviate is, of course, an Americanism. It is a pseudo-Latin alteration of blow, in its slang sense 'to boast', also the inspiration for the early-nineteenth-century blowhard. This type of word-formation--adding Latinate affixes to English words--was popular at the time; some of the words that still have some currency is [Sic] absquatulate [1] 'to run away; flee' from abscond and squat, and obfusticated, for 'confused; obfuscated.'
--Words @ Random, "The Mavin's Word of the Day"(http://www.randomhouse.com/words).
____________________________________________________

"Thank You!" to Sean for noting that on every FoxNews broadcast of the eponymous "O'Reilly Factor," host Bill O'Reilly* uses the word bloviate as one of his signature words.

A PROVERB FOR BLOVIATION-AFFLICTED SOULS

Blessed is the man who, having nothing to say,
abstains from giving worldly evidence of the fact.