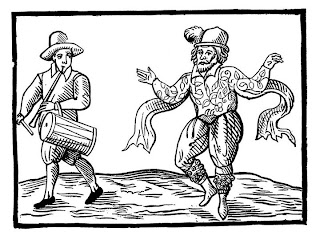 1. an incongruous mixture [usu. in the singular]

• a motley of interacting interest groups

2. historical, the particolored costume of a jester

Motley (the noun) frequently appears in phrasal form, such as "to wear motley" and "in motley." —Oxford English Dictionary

During the Middle Ages and the Renaissance, Court Jesters — those proto-typical stand-up comics who cracked jokes, posed riddles, sang, and danced to entertain kings, queens, and other nobility — "traditionally wore brightly colored clothes in a motley (that is, somewhat random and disheveled) pattern, and a hat (called a coxcomb) which was made of cloth and very floppy, hanging down in three points, at the end of each was often a bell." —weuropeanhistory.suite101.com 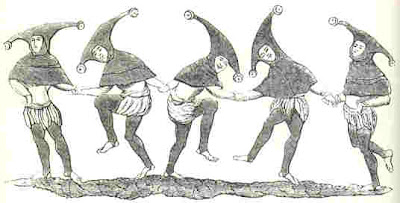 Jesters from a 13th Century manuscript

Read more about the Jester at ClownsoftheWorld.com/jester.

Before motley (the noun) takes to the stage, there are two introductions I must make, that of motley (the adjective) — a word widely apparent and in today's prose, lately, suffering the scuffs of ill-fortune — and motley (the verb) — a word spotted (as a pun, or likely as not) far less often.

As an adjective — meaning incongruously varied in appearance or character; disparate — motley appears more frequently in today's prose, roughly 74% of the time, according to Webster’s Online Dictionary, than does motleyas a singular noun, which appears only 16% of the time, with proper nouns accounting for the remaining 10%. Here is the adjective motley at play in a typical mix of recent clippings from the New York Times:

• a motley crew of discontents and zealots,
• a motley collection of surplus goods, and
• a motley mix of stores, factories, and small apartment houses.

Many of us have also heard, or heard of, the rock band, Mötley Crüe, whose members, over the years, have kicked around and scuffed the name Mötley Crüe through associations with their unbridled behavior, which includes having fronted "numerous brushes with the law, spent time in jail, suffered long addictions to alcohol and drugs, had countless escapades with women, and are heavily tattooed," as reported by Wikipedia.com.

The behavior of the band's members has had serious corrosive effects not only on the word crew, but also on the adjective motley according to Zadie Smith, award winning novelist and contributing editor to the Oxford American Writer's Thesaurus (OAWT). In her Word Note on the word motley in OAWT (page 592), Smith opines the unfortunate fate of motley (the adjective).

Smith avers that the word motley is on

an unfortunate downward slide. For reasons to do with police officers and a rock band it has become irrevocably attached to the word crew and now conjures up visions of something shabby — varied in its shabbiness — but definitely shabby, unlikely-looking. When we hear it in As You Like It, "O that I were a fool! I am ambitious for a motley coat," we can only wonder why. How exactly motley got its down-at-the heal associations is unclear. It means simply "diversified in color, multicolored, variegated" and should be, by rights, as value-free as its synonyms. True, the noun has the secondary meaning "incongruous mixture" and true, motley is itself a synecdoche* for a jester's incongruously colored coat— but shabby? Untrustworthy? Suspicious? Even dangerous? Motley need rehabilitation.

*Synecdoche: a rhetorical figure of speech that substitutes a part for a whole. "Take thy face hence." Macbeth 5.3.

Note that Smith makes a generic reference to "a rock band," eschewing any mention of the name Mötley Crüe. We know that it is the band Motley Crew that she is inferentially blaming for motley's "unfortunate downward slide." Motley, in her view, has been transmogrified into something linguists call a skunked term, a word that has undergone a marked change from one use to another. Motley has been skunked by a process that usage authority Bryan A. Garner identifies as slipshod extension,

the mistaken stretching of a word beyond its accepted meanings, the mistake lying in a misunderstanding of the true sense,

or as the H. W. Fowler, the usage sage of earlier generations, explained it,

when some accident gives currency among the uneducated to words of learned origin.

In sum, motley (the "learned" adjective), in Smith's view, is losing its traditional meaning of "diversified in color, multicolored, variegated" because it is being skunked into meaning "something shabby — varied in its shabbiness — but definitely shabby" by "the uneducated" through the process of slipshod extension. This posting's featured word, motley (the noun), however, appears to be maintaining its footing on the high-ground and has, thus far, dodged the pull of any downslide.

Motley brings its inherent variegation into syntactic action as a transitive verb. It does not make many public appearances as such, and because of our unfamiliarity with it, many of us might, at first try, feel somewhat self-conscious in using it. But handled with wistly deftitude, it can outperform such action verbs as vary, variegate, and parti-color:

• For each repeated request I made for a yes or no answer , the senator would motley a fresh diversion.
• I would motley the sunset [of your painting] with more bright yellows, some cadmium orange, and even a few patches of burnt umber.

And, now, my Lords and Ladies of the Words Worth Readership, it is my honour to hail with undiluted satisfaction this post's featured performer (sennet!), motley (the noun)!

Having dealt, fairly enough, I'd say, with the au courant introductions of motley (the adjective) and motley (the verb), we now move on comfortably to the star of this motley of citations and commentary, motley-the-noun, exploring as many meanings and useful associations as I was able to find enfolded inside its cape and tucked under its coxcomb.

Here it is in play in a sentence about Bud Collins, the sports columnist and television commentator:

He was dressed in his usual motley — pink shirt, rainbow socks, orange cap, and candy-striped pants — and was working the microphone like a carnival barker.

The colors in this image of Bud Collins show just

how motley-apt was the writer's choice of a noun.

As noted earlier, the original meaning of motley is the particolored costume of a jester, and it is in this garb that it makes famous appearances in the speeches of the dour philosopher Jacques in William Shakespeare's As you like It (1623). Perhaps a more famous passage than that cited by Zelda Smith is this one:

In this passage Jacques orates informally to his mates in the Forest of Arden about a love-sated, free-speaking chap (Orlando) whom he's just met nearby, describing him with the accommodated honorific "A worthy fool!," which he then follows with the expostulation "Motley's the only wear!," a proclamation of his admiration for the free-speaking "worthy fools" sanctioned by the Crown, the Court Jesters.

Internet Shakespeare Editions comments that Jacques "craves the freedom of speech traditionally granted the court jester, whose costume--multicolored and patched--proclaimed his eccentricity," thus providing us with two of the word's primary associations: freedom of speech and eccentricity. The Oxford English Dictionary adds two more: "the particolored costume of a jester, harlequin . . . [carries] the allusions of foolery, nonsense."

Eccentric behavior, freedom of speech, foolery, and nonsense — these are all traditional associations that attend the term court jester and the synecdoches — "in motley," "of the motley" and "wearing the motley."

MOTLEY (THE NOUN) IN USE:

If you are not already using the limberly, "learned" noun motley, consider the variety of circumstances the word can address in the following sample sentences from the Oxford English Dictionary and the New York Times.

From the Oxford English Dictionary:

• Their poring upon black and white too subt'ly Has turn'd the Insides of their Brains to motly. S. Butler, 1759.
• So exuberant is Fuller's wit, that..his very wisdom wears motley. H. Rogers, 1874.
• He was an unstoppable fund of theatrical stories; ‘We who don the motley,’ was his usual opening. Tatler, 1992.

From the New York Times

• It's just that Mr. Durang chooses to wear his morality not as a minister's black robe but as a jester's crazy motley. Ben Brantley, April 7, 2009.
• In my days, decades ago, the shack was a circus melange worthy of Fellini -- a derelict tenement sheltering amotley of wit, weirdness, alcoholism and strategic daring. One reporter stayed relentlessly in his office, painting the walls all... Francis X. Clines. April 27, 2009.
• Each time he [Norman Mailer] speaks he must become more bold, more loud, put on brighter motley and shake more foolish bells. Yet of all my contemporaries I retain the greatest affection for Norman as . . . ." Charles McGrath, Obituary of November 11, 2007.

The motley fabric originally consisted simply of a variety of colors among its threads:

Eventually, it took on the appearance of large patches of color, a design invented by the the European counterpart to the English court jester, the Harlequin.

Read more about the Harlequin at clownsoftheworld.com/harlequin.

SYNONYMS FOR MOTLEY (THE NOUN)

And I'll add one more synonym, gamuzhle (pronounced: "guh-muzh-ul."), a nonce word coined by my own mother, Margaret Therese Horlivy of happy memory. We three kids never thought to ask her where the word came from, but it sounds like a conflation of garbage, mush, and, maybe even, shovel, ending with the suffix -le.

At table she would tell us kids,

Keep the mashed potatoes, peas, and meatballs on your plate in their own places. Don't make a gamuzhle!

Thanks for the memorable word, Mom!

"Motley's the only wear!"