bearing the relationship of a child 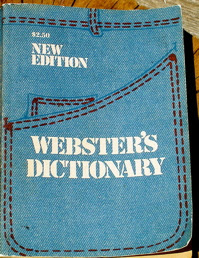 The definitions of filial that appear above come from a compact gem of a dictionary titled Webster's Dictionary—also known informally as Webster's Denim Dictionary [because of the design of its covers]. First published in 1972, now out of print.


The title, Webster's Dictionary, makes false use of a great man's name and my blood boil. At the end of this posting, you will find a short screed I've written about the use of the name Webster in dictionary titles. Read "Never Pre-judge a Book With a Faux-denim Cover and a Title That Lies" if you like. It won't tell you anything new about filial, but it will tell you something about how a book title comprised of only two words can represent deception.

From "Re-Education"
by Ann Hulbert
In China, a child's schooling is a family endeavor worthy of great sacrifice, in money and time. Over dinner in Shanghai, a melodiously voluble Mrs. Tang confirmed that ''when Meijie was very young we controlled her a lot, watched her very closely and guided her carefully. Luckily she was very cooperative and followed our instruction.'' Effort rather than ability is considered the key to achievement -- and among the most important expressions of filial piety is studying diligently (a word I heard a lot). ''If there is no dark and dogged will, there will be no shining accomplishment; if there is no dull and determined effort, there will be no brilliant achievement'' goes an old saying, invoked as soon as school starts -- a far cry from the Western progressive interest in encouraging curiosity and play in the early years.

Neither childish nor childlike will do, because each describes a self-referential behavior. There's no need for parents to be around when a youngster's actions are immature (childish), or are admirably simple and devoid of guile (childlike). And there seems to be no traditional or immediate cultural longing or demand for a specific child-to-parent adjectival modifier, like, say, maybe, child'-al or child'-ren-al, child'-i-al or child-ren'-i-al.

But as you have already read at the top of this post, there is a word to describe a child's response to a parent—it is filial—a word not widely known or used. The phrase filial piety, "respect and devotion to one's parents," is a culture-wide ideal in China, prompted by the strictures of Confusianism. It, too, is not widely used in the United States. A look into the text-search function of the New York Times' archives (http://query.nytimes.com/search/query) indicates that during the past ten years in the Times, the word parental has appeared 3,338 time, filial, 215 times. During the same time frame, filial piety made 32 appearances (more often than I had expected).

At first glance, the Chinese section [of Elizabeth Street, Manhattan, N.Y.] forms a nearly separate enclave, an impression reinforced by faces that seem straight from Ming Dynasty scrolls, drawn with a fine brush in black ink. On the sidewalk a very old Chinese woman, taking the smallest of steps, is supported at the elbow by a young man, probably a grandson, his face showing not the slightest grimace of impatience. Confucian filial piety lives on Elizabeth Street.

Richard Rorty is a scandal to his profession. He is a philosopher who thinks that philosophy is a distraction from more important matters. He has for years argued that the pursuit of Truth -- as distinct from the humbler search for usable truths -- is fueled by self-deception. He has insisted that even if humanity all too often behaves cruelly and sadistically, we would be better off without a sense of sin. Nevertheless, Rorty has a substantial streak of filial piety. It was his hero, John Dewey, who first scandalized his philosophical readers almost a century ago by urging them to turn away from ''the problems of philosophy'' to ''the problems of men.'' ''Achieving Our Country'' is an appeal to American intellectuals to abandon the intransigent cynicism of the academic, cultural left and to return to the political ambitions of Emerson, Dewey, Herbert Croly and their allies.
By Alan Ryan: A book review of Richard Rorty's Achieving Our Country: Leftist Thought in Twentieth-Century America, Cambridge, Mass.:
Harvard University Press. Published in the New York Times on
May 17, 1998.

Here is a limerick titled "Begetter" written by a contributing reader—whose nom de blog is Recumbantman—of the OEDILF website (which touts a bundle of 41,000 limericks):

Few pleasures are simpler or better
Than reading a filial letter.
Will Shakespeare wrote
As a dutiful son
To his father, "the onlie begetter."

The epithet "onlie begetter" appeared in the Dedication that accompanied the original manuscript of Shakespeare's Sonnets. It reads, in part:

The phrase means "the only begetter," "the one who alone inspired" Shakespeare's collection of Sonnets. As Dr. G. R. Ledger — formerly Honorary Fellow, Classics, University of Reading, U.K. ("Shakespeare's Sonnets" at (http://www.nyptkd.com))—explains, that all we know about the identity of "the onlie begetter" is that his initials were probably "W. H."—they are smudged on the page — and that scholars are not at all certain about the authorship of the Dedication itself; it could have been penned by Shakespear's publisher, whose initials, "T.T." appear at the bottom of the page. Recumbantman's enigmatic limerick adds a bit more dead air to the discussion by suggesting that "the onlie begetter" is William Shakespeare's biological father, John Shakespeare, whose initials, clearly, are "J.S."

Sometimes it's difficult to eschew a clamoring-to-be-heard cliche. Making noise in my ear right now is one I'll give into: "Never Judge a Book by Its Cover." The covers of the dictionary that gives us our definition (above) of filial — a rare paperback that calls itself on its front cover Webster's Dictionary and on its back cover Webster's Denim Dictionary — features a textured, faux-jeans blue denim motif, with red stitching delineating the belt line of a pair of jeans and the curved-top of a front pocket, with a smaller watch pocket tucked-right behind it. The lettering is a bold stencil type in white, presenting, just below the center-line, the title in bold capitals, "WEBSTER'S DICTIONARY." The book's cover design represents an over-the-top marketing gambit of the early 70's. "Hey, man, that's a hip dictionary you've got there. Guess a person can look up words and be groovy at the same time."

Besides 550 pages replete with etymologically based definitions of over 75,000 words, the Denim Webster's (and here I am quoting promotional — yet veridical — text from the back cover) is "brilliantly concise" and "exhaustively thorough," a dictionary that "traces word roots in a score of languages."

In additional, the book offers the reader the following added features:
= seven pages of a History of the English Language (including;
= twenty-one pages of over 850 "Words and Phrases from Latin, Greek, and Modern Foreign languages";
= five pages explaining approximately 120 prefixes;
= seven pages explaining approximately 160 suffixes; and
= a solo page delineating the rules of Roman numerals, from I to ICC.

The only trait of the book I dislike is its damnable title!
Here's why.

Since the late 19th century, companies other than the one founded by Noah Webster and eventually known as the Merriam-Webster company, have borrowed on the commercial dictionarial cachet of the name "Webster" and accommodated it for their own use and profit. "As a result of lawsuits filed by Merriam," reports Wikipedia, "American courts ruled that 'Webster's' entered the public domain . . . in 1889 (G. & C. Merriam Co. v. Ogilvie, 159 Fed. 638 (1908)) and another court ruled in 1917 that it entered the public domain in 1834 when Noah Webster's 1806 dictionary's copyright lapsed. Thus, Webster's became a genericized trademark and others were free to use the name on their own works."
"
"So many dictionaries of varied size and quality have been called Webster's that the name no longer has any specific brand meaning. Despite this, many people still recognize and trust the name. Thus, the brand "Webster's" continues as a powerful and lucrative marketing tool. In recent years, even established dictionaries with no direct link to Noah Webster whatsoever have adopted his name, adding to the confusion. Random House dictionaries are now called Random House Webster's, and Microsoft's Encarta World English Dictionary is now Encarta Webster's Dictionary."—Wikipedia.com

To keep hold of as much power as still remains in the original signification of the brand name Webster's, purchasers of 21 century Merriam-Webster products will note on the reverse side of a M-W dictionary that the company still bears resentment at the theft of its name, and offers this snappish statement:
"The name Webster alone is no guarantee of excellence. It is used by a number of publications and may serve mainly to mislead an unwary buyer.
"Merriam-WebsterTM is the name you should look for when you consider the purchase of dictionaries or other fine reference books. It carries the reputation of a company that has been publishing since 1831 and is your assurance of quality and authority."—Merriam-Webster's Collegiate Dictionary, Eleventh Edition, 2003.

Even if copyright lawyers for Noah Webster's early company were at fault, snoozing away their work days in the parks of Springfield, Massachusetts, Noah Webster and the company he founded was robbed!

But note well that this writer is no shill for Merriam-Webster. I, in fact, prefer the current "Random House Webster's College Dictionary" over the current Merriam Webster's Collegiate Dictionary, Webster's 11th, as it is informally known. But every time I pick up my copy of the Random House dictionary, I noticed that purloined name Webster's, with the apostrophe marking possession of a seemingly bipartite company (Random House + Webster) peering up at me, its letters seeming like teeth in a cynical smile ripped from the face of a Random House sales management executive. Though some buyers are impressed by the name Webster's on a non-Merriam-Webster's product, and though the presence of "Webster's" in anybody's dictionary title may be legal, I say such usage of the name is a scamming shame.

Two final notes and this screed will be done. First, more readers should know that the catch phrase "look it up in Webster's" refers not to one particular brand of dictionary but to American dictionaries in general—those that trace their lineage back to Mr.Webster and those that do not. Two, the copy rite for the term "collegiate," as a referent to a size of dictionary appropriate for college work, is currently held by Merriam-Webster. Let's hope they keep that term under the eaves of their Springfield headquarters.

And thus ends the story of a faux-denim soft-backed dictionary published 45 years ago whose pages present lexicography that is notably useful and well-composed but whose title, The Webster's [Denim] Dictionary" carries a wildly unknown sub-text still puffing in outrage at American publishing houses that have stolen a name and muddled recognition of ownership in that niche of the book world given to precision in diction—the ambit of dictionaries.