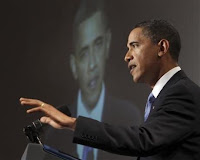 [in-ter-LOC-u-tor]
interlocutor: One who takes part in a dialogue, conversation, or discussion.
In plural, the persons who carry on a dialogue.—OED

•
§ Usage Note:
Interlocutor is part of formal English, hence a word one would find more in print than in daily conversation.
•
§ Etymology
1514, from Latin interlocutus, past participle of interloqui "interrupt," from inter- "between" + loqui "speak."—Online Etymology Dictionary

"[President Barack Obama] commanded the lectern with the presidential seal and the camera was trained mainly on him, while his interlocutors were forced to look up to him from the audience."—Peter Baker and Carl Hulse. "Off Script, Obama and the G.O.P. Vent Politely," Politics, The New York Times, Jan. 29, 2010.

"As soon as Holden Caulfield remarks to his undefined interlocutor – a psychiatrist? – that he isn’t going to go in for “all that David Copperfield kind of crap”, generation after generation of young readers have fallen in love, and will never quite grow out of it."—Philip Hensher. "JD Salinger: "Reclusive, eccentric author of an undying masterpiece" Telegraph.co.uk, 29 Jan 2010.

Mark McGwire was hailed in some circles last week for coming clean on steroid use. Far from it. McGwire, aside from the basic admission, was about as believable with interlocutor Bob Costas as he was in front of that congressional committee in 2005."—Tim Cronin, southtownstar.com/sports/cronin, Jan. 19, 2010.

"This book [Cross-Examining Socrates: A Defense of the Interlocutors in Plato's Early Dialogues by John Beversluis] is, by far, the single best-written book about the interlocutors of Socrates as they appear in Plato's dialogues. —Eric Batterson. "A Look At The Losers Of Plato," amazon.com, November 17, 2000.

•
§ A Synonym from the Past:
converser: One who converses, or engages in conversation.
"In dialogue, she was a good converser: her language … was well chosen; … her information varied and correct." Charlotte Bronté, Shirley, xii.—The Century Dictionary (1889).

§ Scholarly Distinctions Among "interlocutor," "partner," "respondent," and "answerer."
Example  Sentence IV above comments on the book Cross-Examining Socrates: A Defense of the Interlocutors in Plato's Early Dialogues by John Beversluis, a title that stimulated my curiosity to learn a bit more about how a nuanced meaning of interlocutor could be helpful in understanding the Dialogues.  To my good fortune, amazon.com provides a copy of the opening paragraphs of the book. Within these paragraphs, Beversluis offers us a thoughtful description of the meaning of interlocutor, as well as useful distinctions of intent among the words "interlocutor,"  "partner," "respondent," and "answerer."
For those readers interested learning some scholarly refinements surrounding our word interlocutor, here are those paragraphs.

The term "interlocutor" is standardly used in referring to the people with whom Socrates converses in the early dialogues.  According to the O.E.D., an interlocutor is "one who takes part in a dialogue, conversation, or discussion" — an etymological definition which slices the term into its Latin derivatives: inter (between) and loquor (to speak).  Interlocutors are people between who  m there is speech; less cumbersomely, they are people who talk to each other.

This does not take us very far.  There are all kinds of conversations and all kinds of interlocutors, though in ordinary language the term is seldom used.  Few would refer to the person with whom they chatted on the morning train as their interlocutor.  It is a stiff and colloquial term, a term that elicits raised eyebrows, suggesting affectation and alerting those within earshot that they are in the presence of a stuffed shirt.  In short, it is a term to be avoided — unless, of course, one is writing about Plato, in which case one can hardly get along without it.

Even some students of Plato reject the term "interlocutor" in favor of less pedantic alternatives like "partner," "respondent," or "answerer."  But these remedial substitutes are equally problematic. "Partner" fosters the illusion of intellectual equality between participants who are, in most cases, spectacularly unequal and, on occasion, mismatched.  "Respondent" errs in the opposite direction by reducing one participant to a completely passive role.  "Answerer" is unsatisfactory too; Socrates' interlocutors do more than answer questions.  What is needed is not a new term or even a better definition of an old term, but an elucidation of the concept of the Socratic interlocutor which clarifies the dialectical and philosophical functions.  Accordingly, I will retain the term "interlocutor."  In spite of its terminological awkwardness, it best captures the announced philosophical goals and methodological principles which underlie the Socratic elenchus* and are allegedly operative throughout the early dialogues.

*Socratic elenchus: the Socratic method of eliciting truth by question and answer, esp. as used to refute an argument—NOAD. Beversluis notes that the term "elenchus" has become permanently entrenched in Anglo-American scholarly parlance." — John Beversluis. Cross-Examining Socrates: A Defense of the Interlocutors in Plato's Early Dialogues. Cambridge: Cambridge University Press, 2000, 18

•
Cartoons from the website of Neuro-Cognitive Behavioral Communication (NCBC showing the worst and best of what one can expect of the interlocutory process: 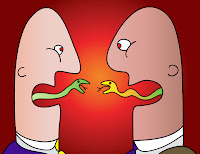 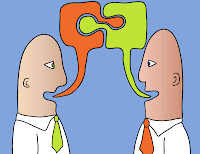