Regional Note. In the 19th century, the vibrant energy of American English appeared in the use of Latin affixes to create jocular pseudo-Latin "learned" words." There is a precedent for this in the languages of Shakespeare, whose plays contain scores of made-up Latinate words. Midwestern and Western absquatulate has a prefix ab-, "away from," and a suffix -ate, "to act upon in a specified manner," affixed to a nonexistent base form--squatul--, probably suggested by squat. Hence the whimsical absquatulate, "to squat away from."

Another such coinage is Northern busticate, which joins bust with --icate by analogy with verbs like medicate. Southern argufy joins argue to a redundant -fy, "to make; cause to become. Today these creations have an old-fashioned and rustic flavor curiously at odds with their elegance. They are kept alive in regions of the United States where change is slow. For example, Appalachian speech is characterized by the frequent use of words such as recollect, aggravate, and oblige (7-8).

From The American Heritage Dictionary of the English Language, Fourth Edition, 2000 [AHD].


COMMENTS:
AHD speculates in its "Regional Note" that absquatulate is a mock Latinate formation "to squat away from." If we read this definition too literally — and let's do that,  just for fun —  as a verb describing a dynamic action, we are asked to picture one very close-to-the-ground style of self-mobilization.  Imagining a person "squat away from" some location appears, at least in this writer's imagination, as someone "squat-walking," i.e., starting from the squat position, moving the bent right leg forward in what we might loosely call a "step," moving the left in a likewise fashion, then the right, and the left and so on. It's something like the shikko movement in the martial art of Aikido: low striding leading with one's knees; knee walking. I can't imagine one person asking another to go "shikko" or "squat-walking" in the park.
Therefore, I think that The American Heritage Dictionary's 1a definition of absquatulate (at the top of this page) is the operative one: "to depart in a hurry; abscond." Here, I picture a squatting (or seated or reclining) person enjoying an otiose moment on a front porch. Out of the front door comes a friend who says, "Hey, let's obsquatulate!" The squatter, who agrees with his friend's suggestion, stands up and joins her in going for a walk.
Not surprisingly, absquatulate--a word that states a negation--opens with the prefix "ab-," which means "away from" or simply "not" (as in ab-normal). Accordingly, the erstwhile squatter decides "not" to squat any longer but to "move out of" the passive mode of  "squatage" (a nonce word for today) in order to "move into" the dynamic mode of walking.
EXAMPLE SENTENCE:

If not kept under guard, the suspect will, for sure, absquatulate.  You know, bolt right off!  Like Nightcrawler:  go bamf! [1] --B'nJ'n 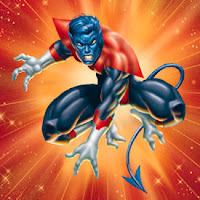 Nightcrawler, one of the X-Men
fanpop.com

[1] bamf: the noise made by Nightcrawler (of the X-men comic book series) when he uses his teleporting [2] powers.

[2] teleporting: the ability to jump nigh-instantaneously from one location to another.

"Nightcrawler flashed in and out of the President's office leaving nothing but a brief hint of brimstone."

•
A Final Note:
Watch out!  The letters b-a-m-f , as the acronym B.A.M.F., carry a shameless street-wise significance, "Bad Assed Mother F*cker, usually a term of approbation". --The Urban Dictionary http://www.urbandictionary.com (15 Feb 2007).
#
Posted by John Horlivy at Thursday, February 11, 2010 No comments:

farragO
noun
[fuh-RAH-goh] or  [fuh-RAY-goh ]
MEANINGS
§ farrago: a confused mixture; a hodgepodge  plural farragoes. —NOAD
•
§ Farrago [fuh-RAY-goh]. A farrago of nonsense. A confused heap of nonsense.  —Brewer's Dictionary of Phrase and Fable, Centenary Edition, Revised by Ivor H. Evans. New York: Harper and Row, 1981, 414.
•
§ farrago is a medley, mixture or conglomeration.
nnIt originally referred to mixed fodder for feeding cattle and comes directly from the Latin.  It is pronounced fuh-RAY-goh or fuh-RAH-goh.  Though it is usually seen in the phrase "farrago of nonsense," Virginia Wolf once rang a change on this phrase, speaking of a "farrago of absurdity."—From William and Mary Morris. Morris Dictionary of Word and Phrase Origins. New York: Harper and Row, 1977, 215.
•
§ farrago — one of many words used to describe a mixture of diverse objects.  From the Latin word for mixed fodder for cattle.
nnOther words for for this kind of mismash are…hodgepodge, gallimaufry, olio, potpourri, goulash, salmagundi, pastiche, omnium gatherum (itself a mixture). and even ministrone. "They persist in compounding the original error, if that is what it was, with a farrago of falsehoods."—Maxwell Nurnberg.  I Always Look Up the Word "E•gre•gious.  News York: Barnes and Noble, 1981, 79.
IN USE

The film ["All About Steve"] is such a misjudged farrago that it makes Miss Congeniality [Sandra Bullock] seem like a masterpiece.—Derek Malcom. "No hilarity in All About Steve," Evening Standard, 15.01.10.

It is not possible to know why this absurdly rich and amazingly famous (for two lifeless dullards) pair [Brad Pitt and Angelina Jolie] have decided to give up. Could it be that any relationship predicated on obvious sexual misconduct and a farrago of lies can never come to any good? —Lynn Crosbie. "Nothing could be better than an end of this affair," theglobeandmail.com, Jan 26, 2010.

But in Roget’s II: The New Thesaurus, Third Edition, we get a definition [for miscreant] of “utterly reprehensible in nature or behavior” and a fearsome farrago of synonyms as adjectives: “corrupt, degenerate, depraved, flagitious, perverse, rotten, unhealthy, villainous.—William Safire. On Language, "Dictionarus," New York Times Magazine, June 10, 2009.

I tried to illustrate my mind: what it sees, the way it feels, or when thoughts and ideas come to me. I tend to live in my head most of the time.  The drawing begins at the bottom left hand corner (which is my head) and then everything pops out and spreads out.  If your wondering, “farrago” means: a confused mixture; jumble; hodgepodge. ~ Erika  (redbubble.com)

AN OMNIUM GATHERUM OF
SYNONYMS FOR FARRAGO,
IN TWO PARTS
PART ONE: Distinctions Among  Basic Synonyms for Farrago, From The New Oxford American Dictionary (2006)
NOAD defines farrago as  "a confused mixture," exemplifies it with "a farrago of fact and myth about Abraham Lincoln," and then invites us to "See note at jumble."  At the entry for jumble we find an entry called "THE RIGHT WORD," which draws distinctions among the following terms: confusion, jumble, hodgepodge, conglomeration, melange, farrago, and disarray.  As you will see in this arrangement, a farrago is less confused than a conglomeration or a disarray but more confused than a muddle.

Confusion is a very broad term, applying to any indiscriminate mixing or mingling that makes it difficult to distinguish individual elements or parts (: a confusion of languages).

The typical teenager's bedroom is usually a jumble of books, papers, clothing, CDs, and soda cans—the word suggests physical disorder and a mixture of dissimilar things.

If the disorder exists on a figurative level, it is usually called a hodgepodge (: a hodgepodge of ideas, opinions, and quotations, with a few facts thrown in for good measure).

Conglomeration refers to a collection of dissimilar things, but with a suggestion that the collection is random or inappropriate (: a conglomeration of decorating styles).

A mélange can be a mixture of foods (: add peppers or zucchini to the mélange), but it can also be used in a derogatory way ( an error-filled mélange of pseudoscience, religion, and fanciful ideas).

A farrago is an irrational or confused mixture of elements and is usually worse than a conglomeration (: a farrago of doubts, fears, hopes, and desires), while a muddle is less serious and suggests confused thinking and lack of organization (: their bank records were in a complete muddle).

Disarray implies disarrangement and is most appropriately used when order or discipline has been lost ( his unexpected appearance threw the meeting into disarray).

PART TWO: "A Synonymicon (collection of synonyms) of Farrago Equivalents"
If NOAD's list of synonyms for farrago proved helpful but seemed a bit "tame," consider this list of 25 more rumbustious synonyms, each word denoting a distinct variety of disorder, selected from a farrago (of course) of sources — primary among them  Sisson's Word and Expression Locater (1966) — with each term defined by its corresponding entry in the OED.   —A.F. Sisson. Sisson's Word and expression Locator. West Nyack, N.Y.: Parker Publishing, 1966, 201, 205.
Words Worth's Synonymicon of Farrago Equivalents

adversaria   [ad-ver-SAIR-i-a] (Latin) A commonplace-book, a place in which to note things as they occur; collections of miscellaneous remarks or observations, = miscellanea; also commentaries or notes on a text

assemblage   [a-SEM-blij] (French) A bringing or coming together; a meeting or gathering; the state of being gathered or collected. A number of things gathered together; a collection, group, cluster.

charivari [CHIV-a-REE] A confused, discordant medley of sounds; a babel of noise.

congeries [kon-JIR-eez] (Latin) A collection of things merely massed or heaped together; a mass, heap.

concourse  The running or flocking together of people; the condition or state of being so gathered together.

conversazione   [KON-ver-SAHT-se-O-nay] Now chiefly used for a soirée given by a learned body or society of arts, at which the society's work is illustrated by the exhibition of specimens, experiments, and demonstrations.

fantasia Music. ‘A composition in a style in which form is subservient to fancy’ (Stainer and Barrett).

A dish made by hashing up odds and ends of food.

The quality or condition of being heterogeneous:  a. Difference or diversity in kind from other things;  b.Composition from diverse elements or parts; multifarious composition.

(French) 1. A medley or mixture of unrelated things. 2. Mixed fruit or vegetables cut up into small pieces.

(Latin, Italian) As a mass noun: miscellaneous items, esp. literary compositions, that have been collected together, regarded collectively.

(origin unknown) An incongruous, multifarious, or confused mixture or assembly. Freq. with of.

Miscellaneousness; an instance of this.

(Spanish) A highly spiced stew of Spanish and Portuguese origin, made from various kinds of meat and vegetables.

(Latin) Chiefly colloq. A gathering or collection of all sorts of people or things; a catch-all, an inclusive group or category.

(French) 1. a. A novel, poem, painting, etc., incorporating several different styles, or made up of parts drawn from a variety of sources.

2. a. A work, esp. of literature, created in the style of someone or something else; a work that humorously exaggerates or parodies a particular style.

b. The technique of incorporating distinctive elements of other works or styles in a literary composition, design, etc.

(French): A mixture of dried petals of different flowers mixed with spices, kept in a jar or bowl to perfume a room. Also fig.