mThe action of throwing out of a window.

Defenestration of Prague, the action of the Bohemian insurgents who, on the 21st of May 1618, broke up a meeting of Imperial commissioners and deputies 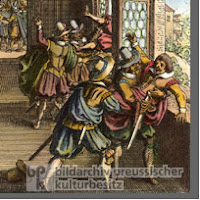 of the States, held in the castle of the Hradshin, and threw two of the commissioners and their secretary out of the window; this formed the prelude to the Thirty Years' War

From "Operation Freedom from Iraqis"
OP-ED Essay by Frank Rich,

The new White House policy, as Zbigniew Brzezinski has joked, is "bame and run." It started to take shape just before the midterm elections last fall, when Mr. Rumsfeld wrote a memo (propitiously leaked after his defenestration) suggesting that the Iraqi people might "have to pull up their socks, step up and take responsibility for their country." 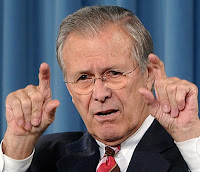 What Probably Happened:
The Moments Preceeding the Defenestration 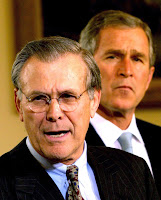 As Secretary of Defense Donald Rumsfeld stares through the fated window on the top floor of The White House—with the President peering over his shoulder through the same window—he says:

"You know, Mister President, outside that window are millions of Americans standing stalwart in gratitude to me (and thus by extension, to you, sir) for the policies and practices that I have given you in well-advised advisements, advisements which I then advisedly brought to fruition, undiminished in any way by apparent (i.e., seeming) need, hewing ever and increasingly more full-heartedly to the guiding principal of parsimony in the field, all of this, I should say, Sir, redounding splendidly to the benefit of us — ultimately, Sir, I should say, Sir, with respect, Sir — of us all."

Concurrently, throughout the Secretary's encomium — not a word of which reached the President's ears — The Defenistrator-qua-Decider-in-Chief pondered how to manage the next problem: that of gracefully moving the Secretary, whose shoulders are broad of beam, through that single available window—one of good height from the ground, but of narrow dimensions in construction—one not propitiously designed for ease of departure during a defenestration. 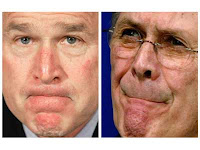 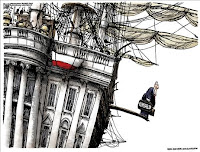 At sea, of course, we
call it "walking the plank."
Cleverly, the cartoonist here
has created a leaning (to the
Right*), listing structure that is
part White House, part ship at sea.

*Antanaclasis: a form, yes, of the Pun.

Now that we've discussed the meaning of defenestration, the question arises: What does fenestration mean? To throw something or someone up from the ground into a building's high window? No. Read on . . . .

DEFINITION from the Oxford English Dictionary.

1. The arrangement of windows in a building 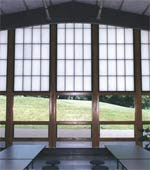 • I see no difference of principle in the fenestration of the Early French and the Early English Pointed styles.—1879 Sir G. G. SCOTT

2. Anatomical a. The process of becoming perforated; the formation of small holes. b. The condition of being fenestrated or perforated.

Q. Who or what qualifies for a defenestration?

A. Anything, anybody. The window's wide open. 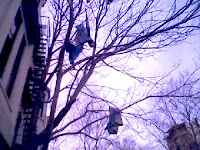