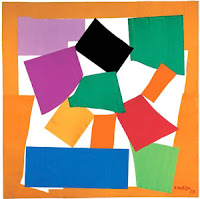 At first, the subject matter of this gouache-on-paper assemblage by Henri Matisse may appear recondite, incomprehensible.  But once we learn that the artist titled his work "The Snail," the swirling patches of color do seem to suggest a snail-like image.

——————————————————————
MEANING
recondite  [RəK'-con-dīt]  adj.
➤ (of a subject or knowledge) little known; abstruse:
the book is full of recondite information.
Recondite denotes topics that are known and understood by only a few experts.
There is often a critical suggestion that difficulty or obscurity has been deliberately sought out or magnified. —NOAD
——————————————————————
Recondite IN USE
➣ And [Cardinal] Ratzinger was renowned at the Vatican for poring through voluminous, recondite theological treatises.—Maureen Dowd, "A Nope for Pope," The New York Times, March 27, 2010.
➣ Indeed, you find autistic savants with stunning skills in recondite fields like prime-number recognition and factoring, who are nevertheless hopeless at simple arithmetic —Christopher Badcock. "The Imprinted Brain," Psychology Today, April 7, 2010
➣ Compared with the Cubist-period work of his near contemporary Picasso — one picture after another that can be like a cheese grater for the eyes — even the most recondite Matisse is pretty beguiling. — Richard Lacayo. "Great leap forward: Matisse in Chicago,"  Apr. 12, 2010.
——————————————————————
SYNONYMS
abstruse, obscure, arcane, esoteric, recherche, profound, difficult, complex, complicated, involved; incomprehensible, unfathomable, impenetrable cryptic, opaque. —OAWT
—————————————————————
ANTONYMS
Exoteric, well-known
——————————————————————
ORIGIN
1649.  Recondite derives from the Latin verb re•con•dere which signifies "store away."  Re- means "away, back"; con- means "together"; and -dere means "to put, to place."  Thus we can think of a complex entity whose elements have been brought "together" and  "placed" in the "back," "away" from all else.
——————————————————————
RELATED FORMS
rec·on·dite·ly, adv.
rec·on·dite·ness, n.
un·rec·on·dite, adj.
——————————————————————
COMMENT:
The closest synonym to recondite seems to be abstruse. If this is so, it would be useful to ask, When do we use recondite, and when do we use abstruse?
OAWT states that we use recondite when dealing with topics that are "known and understood by only a few experts" and that we use abstruse when dealing with topics that are "difficult to understand, puzzling to almost anyone."
Recondite prompts the image of peering through a transparent pane of glass and seeing images only an expert can explain, whereas abstruse suggests trying to look at something through an opaque pane of glass but seeing only vague, unrecognizable shapes.
I hope my readers perceive what I've written here to be articulate and not recondite or, worse, abstruse.
#
Posted by John Horlivy at Tuesday, April 20, 2010